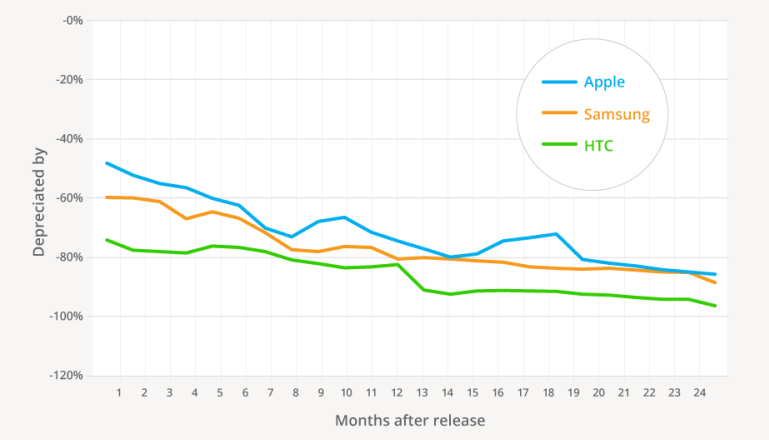 Your Cell Phone Loses Value Quicker Than Your Car!

Did you know your cell phone loses value over time? There goes a cent! And another!

Believe it or not, this is totally normal. It’s a process we call phone depreciation.

What is phone depreciation?

You know how a car loses half its value as soon as you drive it off the lot? Well, phones are the same. As soon you take it out of the box, your phone starts losing value.

Different phones depreciate at different rates though, depending on the model, initial cost and the quality of the device.

Why does it happen?

Apple, Samsung and the rest release new phones every year, all of which are faster, prettier and more powerful than last year’s models. When a new device comes out, or is even rumoured or announced, the resale value of your current phone drops.

However, it also depends on the quality of the phone and its components. For example, the iPhone holds its value well because partially because of the brand name.

By now, you’re probably wondering how much your cell phone is worth.

Well, it depends as depreciation varies from phone to phone. What is certain is that your phone will lose most of its value within the first year. After that, value typically drops at an average rate of 1 – 3% per month. Again, this depends on the device you own.

Here are some examples of phone depreciation…

The Samsung Galaxy S4 was a great phone that received great reviews. However, it lost half of its value within just two months of launch.

It’s no secret that HTC are having a hard time at the moment, so it’s no surprise that the HTC One M9 is one of the biggest victims of phone depreciation – it lost 65% of its value within just one month!

This is probably due to the hugely respected and recognisable brand name (iPhones are always in demand) and the lack of competition they face compared to Android devices.

The only iPhone to lose a significant amount of value is the iPhone 5, which was worth 66% less 8 months after launch. This was no doubt due to the launch of the iPhone 5s.

Should you buy an iPhone?

If resale value is a major concern for you, then an iPhone is your best bet. They hold their value better than any other smartphone and are generally the best investment.

However, you shouldn’t base your choice of cell phone solely on resale value. As all phones lose their value eventually, it’s better to buy a device that suits your current requirements.

It’s worth selling your old phone

Phone depreciation isn’t a reason to avoid selling your phone. If anything, it’s a good reason to sell your phone as soon as you can; it’ll only lose more value sitting at home at drawer. You can put the cash towards an upgrade too.

Sell your cell phone with Decluttr or check out our sell my iPhone page to get the best possible price! We’ll give you an instant value, fast next day payment and with our price promise, you’re guaranteed to get the first price we offer – or we’ll return your phone for FREE!

View all post by Chris Smith.
← 7 things you need to know about the iPhone 7
How to save money using your phone →