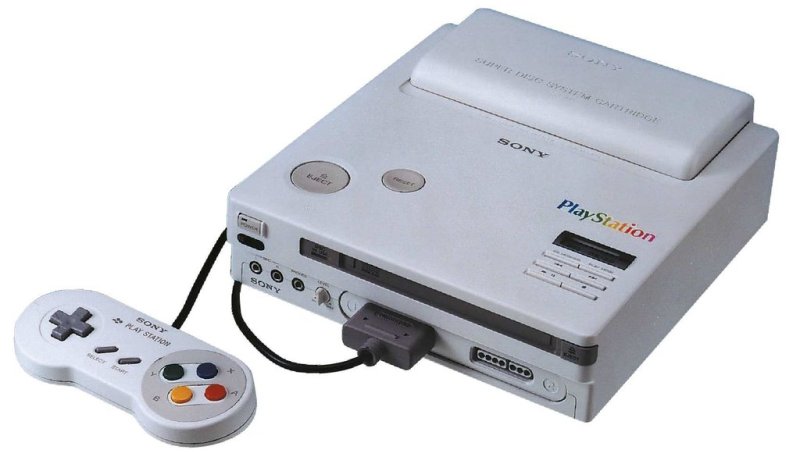 For every PlayStation, there are a ton of consoles that never make it to market. Here are some of the ones that might have actually been pretty good…

As strange as it seems now, Sony and Nintendo were best buds in the early 90s. Sony manufactured sound chips for the SNES and Nintendo were so impressed that they asked Sony to develop a CD-ROM add-on for the console.

The project got so far that Sony even displayed a prototype of their CD-ROM SNES at CES 1991. However, a dispute over royalties rumbled on in the background.  The dispute led to Nintendo withdrawing from the agreement and collaborating with Philips instead (the result being the infamously bad adaptations of Zelda and Mario for the CD-i).

Nintendo eventually allowed Sony to continue working on their console, but Sony decided to focus on a certain 32-bit console instead. That console, the PlayStation, would eventually cement Sony as the kings of gaming.

It was believed that all 200 SNES PlayStations were destroyed… until Philadelphians Terry and Dan Dielbold found a working prototype in their home in 2015. Who knows what might have been had Sony and Nintendo not fallen out?

Back in 1992, the idea of streaming movies (let alone video games) instead of buying physical copies was as far-off as flying cars and hoverboards. That didn’t stop Taito from trying though.

The Wowow included a satellite receiver designed to stream games, with players paying for the time they spent gaming instead of buying the game itself. It was a revolutionary idea, and one that would come to define the entertainment market 20 years later (Microsoft have only just launched their own game streaming service!).

Unfortunately, Taito were too far ahead of the curve. Technical difficulties and the sheer cost of putting a satellite receiver into a games console led to the company scrapping the console and focusing on games development instead.

If you wanted to chart the beginning of Sega’s decline, the Neptune would be a good place to start.

The Neptune was a hybrid of the massively successful Sega Genesis and the ill-fated 32X, an add-on designed to appease gamers until the launch of the Sega Saturn.

However, Sega’s muddled plans meant that the 32X was actually released at the same time as the Saturn in Japan. To make matters worse, Sega’s rush to get the 32X to market resulted in cut corners and terrible games.

The 32X sold well at first but third party developers wouldn’t get on board with the Saturn, PlayStation and N64 on the horizon. It flopped and the Neptune was subsequently scrapped, even though it could have been a great bridge between generations and a cheaper alternative to its expensive rivals.

There was a lot of hype around 3DO’s M2 chip in the mid-90s, with 3DO’s original plan to license the chip out to various manufacturers building different consoles.

However, Panasonic came in with an offer they couldn’t refuse; a cool $100 million for the chip.

With the chip in their possession, Panasonic planned their own console. Reviews from the time suggest that it was one of the most powerful consoles on the market, but other reports claim it suffered from long load times and unusually high failure rates.

With those issues and the PlayStation dominating the games console market, Panasonic decided to scrap their console in mid 1997. Fortunately, that super expensive M2 chip found life beyond gaming and was later used in ATMs and Japanese coffee vending machines.

The aptly-named Phantom is one of gaming’s most notorious consoles.

First revealed in 2003, the Phantom promised a revolutionary new gaming experience. Instead of buying physical games from the store, you’d be able to stream PC games direct to the console after paying for an online subscription.

People were naturally excited, but it soon became clear that Infinium (later known as Phantom Entertainment) had promised too much. The release date slipped from August 2003 to November 2004, before sliding again numerous times in 2005.

After years of mockery from the gaming press, the Phantom was quietly dropped in 2006 amid reports of financial trouble at Phantom Entertainment. Despite its reputation, the Phantom could have been a gamechanger if it fulfilled all of its promises.

The Cosmos was a tabletop gaming system with a seriously cool gimmick: holographic technology.

Well, we say holographic technology. The Cosmos was actually just a regular console (that looked like a credit card reader) with a series of holographic slides designed to sit over an LED display to give the impression of a 3D experience.

Work on the Cosmos began in 1978, although the public didn’t get a proper look until the 1981 New York Toy Fair. It didn’t go well, with critics savaging the console for its gimmick-y take on holographic technology. The public still placed around 8,000 pre-orders though, suggesting Atari could have a hit on their hands.

However, the Cosmos never made it to market. It was cancelled at the end of 1981, apparently due to the terrible reception it received from critics. Only five Cosmos consoles are still in existence and only two of them work (one of which is on display at the Atari History Museum).

Is your games console gathering dust, or do you need some cash to upgrade? Then sell your games console with Decluttr today! You can also sell other Tech, including trade in iPad, trade in Phone or check out our sell my phone page. Plus, sell CDs online, trade in games or sell books online.

We’ll give you an instant price, FREE shipping and we’ll pay you the day after your items arrive. Check out the video below to see how it works, then click the button below to find out how much you could make.

View all post by Chris Smith.
← What are the worst video games ever?
Who is the most popular video game character in your state? →