Who is the most popular video game character in your state?

Gamers have long debated over which video game character is the greatest of them all. Unfortunately, most of these debates are based entirely on opinion and only lead to more arguments and occasional name-calling.

To settle the debate once and for all, we decided to use cold hard Google search data to find out which character each state loves most. Here’s what we found… 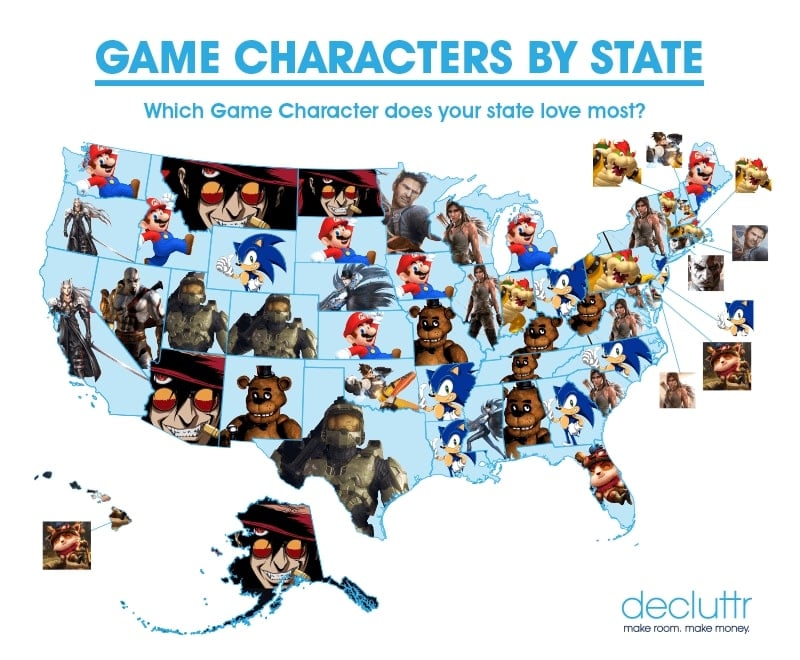 Tied for 2nd with 6 states each are Tomb Raider’s Lara Croft (Illinois, Maryland, New York, South Carolina, Virginia and Wisconsin) and a surprise entrant, Freddy Fazbear from the cult horror series Five Nights at Freddy’s. Freddy, the mascot for a fictional pizza chain, is the most searched character in Alabama, Kentucky, Missouri, New Mexico, Tennessee and West Virginia.

Other popular characters included Alucard from Castlevania (4 states), Master Chief (3) and Teemo from League of Legends (3). Villains proved to be surprisingly popular too, with Bowser taking 4 states and Final Fantasy VII’s Sephiroth the most searched character in California and Oregon.

Who is your favorite video game character? Let us know in the comments.

Selling Games Consoles or want to trade in games? Give Decluttr a try! Simply get an instant price, ship your items for FREE and we’ll pay you the day after they arrive when you sell stuff online with us!

Here’s the full list of states and the characters they searched for most.

View all post by Chris Smith.
← The greatest unreleased games consoles
Which Pokémon does your state want the most? One year on… →