The Moving Violations - Faster Than a Walk 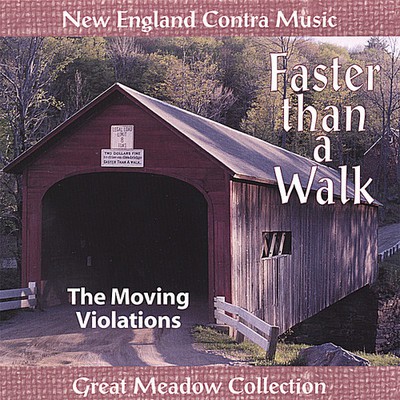 Van Kaynor fiddle, Ron Grosslein fiddle, mandolin Becky Ashenden piano,accordion,feet Doug Feeney banjo, guitar, Chuck Corman bass, percussion, guitar ============== New England contra dance is driven by the music, and The Moving Violations are one of the most exciting drivers, playing a mix of traditional and original tunes with melodies from Scandinavia and Eastern Europe. Van Kaynor and Ron Grosslein, longtime fiddle favorites on the New England dance scene, lead and inspire the quintet. Their fans expect the unexpected. ============== When The Moving Violations play for a New England contra dance, there is one thing about which they are absolutely serious: this is supposed to be fun. The quintet includes fiddlers Van Kaynor and Ron Grosslein, accordion and piano player Becky Ashenden, mandolin-banjo-guitar ace Doug Feeney, and bassist-percussionist Chuck Corman. Their fans come to dances expecting the unexpected. The band loves to surprise dancers by pushing the boundaries of the contra repertoire, sprinkling familiar tunes with odd and lovely little surprises, and with a grand sense of musical mischief. "It's a bit of a contradiction to say we're serious about having fun, but it's true," said Van Kaynor. We're a dance band -and that means when we play, it's a two-way street. We get a lot of energy from each other and from the dancers, a lot of encouragement to fool around when we play." That spirit fills every note of this wonderfully played, frisky CD. The title comes from a sign on the Vermont covered bridge in the cover shot, which says "Two Dollar Fine for Travel on This Bridge Faster Than a Walk." To the band, it echoes the lawless abandon and playfulness implied by their own name, The Moving Violations. As much as the band loves to surprise it's fans, it never does so at the expense of the dance. Ashenden's rock-solid piano chords teach contra cadences to the dark eastern European melodies of the medley begun by Feeney's wry Balkanesque. Similarly, her accordion close-dances with the powerful twin fiddles that are the band's hallmark as the contra standard Allie Crocker opens into a Serbian dance tune. The change comes with such grace the two melodies seem like old neighbors. Slyly hesitant fiddle harmonies flirt with the melody of the Swedish Polska Slipstenen, but not in ways that disturb the gliding tempo. In Vivaldi In Paradise, listen to how Baroque master Antonio Vivaldi is taught to kick his heels and do the hay-for-four by Kaynor and Grosslein's exquisite fiddling. Feeney's guitar captivatingly sets the wistful mood for Fransk Vals. Everywhere, the supple groove of Corman's bass and percussion thickens the sound, adding color and maintaining cadence. Just as a good story grows in the telling, this band grew in the playing, sprouting out of the Kaynor family band, the Fourgone Conclusions. The Kaynor family had a tremendous effect on the contra dance revival in the late '70s, particularly when Van's cousin David began the still-thriving Greenfield, MA, dance. "For us in New Hampshire," said popular dance caller Steve Zakon-Anderson, "the Kaynors were the magnet that drew us down to Massachusetts. They were doing pretty traditional tunes, but being really creative with them, having two or three fiddlers up there doing different harmonies, changing the energy levels in ways most other bands weren't doing back then." Over the years, various Kaynors went this way and that, and the lineup that is now The Moving Violations took their place. Becky and Doug have played with the Fourgones since 1978. Down to only one Kaynor by 1999, the addition of Grosslein crystallized in everyone's mind that this band had grown into a different creature entirely. Ron was a founding member of Swallowtail, another band that has had tremendous effect on the contra dance revival of the last 25 years. A name change was in order, recognizing that The Moving Violations was pushing contra's edges in it's own unique ways. "Where the Fourgones were doing traditional tunes in this exciting new style," said Zakon-Anderson, "this group also brings non-traditional music to the contra repertoire, adding eastern European, Scandinavian, even classical music. It's that same playfulness applied to the choice of material as well as how it's played." As The Moving Violations, they continue an even older contra dance tradition of being welcoming - to new tunes, new ideas, new dancers, and sit-in musicians. "New England contra dance music is a melting pot," said Kaynor. "It's repertoire reflects all the different immigrants who came here - English, Irish, Scottish, French-Canadian, and so on. Today, the doors have opened so much between countries that those musical borders seem even less restrictive." "But one part of the tradition we don't mess with is the music's danceability. The music needs to fit the phrase and figures of the contra dance. Part of the reason for our fun and playfulness is to have the dance feel friendly and accessible to everyone. We're limited by the tempo, but with so much music out there, that doesn't feel like much of a limitation. So long as it's danceable, the sky's the limit."

Here's what you say about
The Moving Violations - Faster Than a Walk.