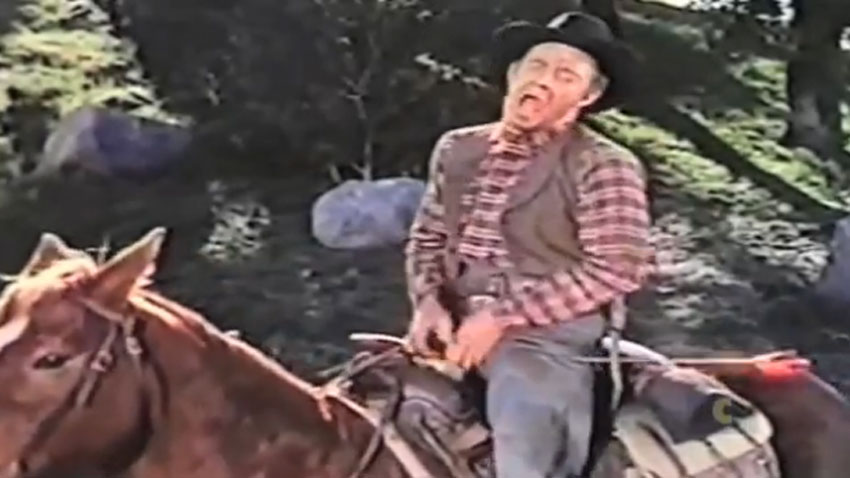 The Wilhelm Scream: A history of the most famous scream in history

What do Batman and Robin, Return of the King, and Return of the Jedi have in common? If you answered that they’re all really expensive and inferior sequels, then yes, you’re right! But more importantly than that, they all feature one of the most infamous sound effects in film history: the Wilhelm scream. And it’s not just those films. If you’ve watched any movie made in the past fifty years, you’ve probably heard the Wilhelm scream more times than you can count and, if you’re anything like me, definitely way more times than you’ve heard your parents tell you that they love you. Thanks for nothing, Mom and Dad!

So how did this humble sound effect rise in notoriety to be featured in hundreds of movies, TV shows, video games, commercials and even that one really cool photo montage I made for my brother’s wedding? Well, it’s a tale as old as time. A movie features a scene in which a soldier is marching through a swamp and gets eaten by an alligator. We’ve all heard that old cliché before. The film in question was 1951’s Distant Drums and urban legends suggest that the actor responsible for the scream was Sheb Wooley. I know what you’re all thinking: but isn’t Sheb Wooley the brilliant performer who recorded legendary novelty song “The Purple People Eater?” Well it turns out ol’ Sheb was a classic triple threat (novelty song performer, vocal actor, and TV star which I forgot to mention but it’s definitely true) and when time came to record extra sound effects for Distant Drums, Wooley was brought in to provide the fateful scream..

So how does a scream recorded by a man named Sheb end up dubbed the Wilhelm Scream? Is there some sort of Ellis Island for sound effects where a stern immigration officer looks at the documentation for each audio clip and says, “No, no, no. This simply will not do. Wilhelm, now that’s a name! A solid name. It was my grandfather’s name and his father’s name before him and thus, with the power vested in me by this Ellis Island for sound effects, I hereby rename the Sheb Scream the Wilhelm Scream?” Actually, no, that’s not how it happened. And if you thought it was, then there’s something wrong with you.

Wilhelm Screams in a Galaxy Far, Far Away

When working on the sound for the original Star Wars, sound designer Ben Burtt discovered a dusty reel in the Warner Brothers library containing the original recording, simply labeled “man being eaten by alligator.” Burtt began digging deep into the annals of history (I guess because sound designing friggin’ Star Wars leaves you with plenty of free time) and found that the sound effect’s first major use after being acquired into the Warner Brothers sound library was in the film The Charge at Feather River. In the film, a young rough-rider gets shot with an arrow. That wounded soldier’s name? Harrison? No… it was Wilhelm. Why would you guess Harrison? Where are you getting that from? Put down your phone and pay attention. I’m trying to teach you something here!

Anyways, Ben Burtt decided that “man being eaten by alligator” was a little too verbose and renamed the clip “the Wilhelm Scream” and it’s been notorious ever since. Burtt went on to do the sound design for other Lucas Film classics like the Indiana Jones trilogy and, either because he was extremely lazy or just a creature of habit, he reused the Wilhelm Scream over and over again. In fact, there’s a scene in Indiana Jones and the Temple of Doom in which a character is eaten by an alligator and they use the Wilhelm scream to accompany it. Isn’t that great? It’s a real return to the classics move. It’s so nice when everything comes full circle and wraps itself up in a tidy little bow like that. Like if this were an episode of Grey’s Anatomy, that little moment of perfection would happen, all the doctors would smile and kiss or whatever happens on Grey’s Anatomy and the credits would roll and you’d be like “man, that was a great episode of Grey’s Anatomy.” Well unfortunately for you and the rest of the Shondaheads out there, this isn’t an episode of Grey’s Anatomy. This is an article… on the Internet. I’m really not sure where all this confusion about this being an episode of Grey’s Anatomy came from and I’m a little concerned about your state of mind.

And the Scream Goes On

Normally, that would be the end of the story for the Wilhelm Scream but Burtt used it over and over and over again in the Star Wars trilogy, a series of films that has inspired and been imitated by every single filmmaker since (with the notable exception of George Lucas who, for whatever reason, wasn’t that into the original trilogy). Ever since Burtt popularized the scream, it’s become something of an in-joke for sound designers who have plopped it down in a wide range of projects including Gremlins 2, Toy Story, The X-Files, and even a Dell computer ad, although we can’t confirm that involved Steve the Dell Guy getting eaten by an alligator although that would explain what happened to Steve the Dell Guy.

Now it’s important to note that the Wilhelm Scream is not the same as another famous scream, the Howie Scream. Though equally recognizable, the Howie Scream is used in totally different scenarios and has a story even more bizarre. Maybe. If you give me enough time to make something up, it will be even crazier than anything I’ve reported here today.

Much like Harrison Ford who began as a carpenter, The Wilhelm Scream sure has come a long way since its early, humble days in the film industry. But unlike Harrison Ford, you can still regularly find the Wilhelm Scream in projects of quality. Directors like Quentin Tarantino, Tim Burton, and Peter Jackson include the Wilhelm Scream in almost every project they make. And if you really want to experience the full range of Wilhelm usage, check out this video below. And next time you’re at the movies, keep your ears open!

Looking to clear out your old DVDs? Trade in with Decluttr today and get an instant price! You can also sell textbooks, trade in games, sell CDs online and more. Plus, make extra cash by trading in your Tech, including sell iPhone, make an Apple Watch trade in or head over to our sell my phone page.

View all post by Decluttr.
← Which ’80s Musical Icon Are You? [QUIZ]
13 of the Absolute Worst Horror Movies Ever Made →