Polly Esther - Wish You Were Here 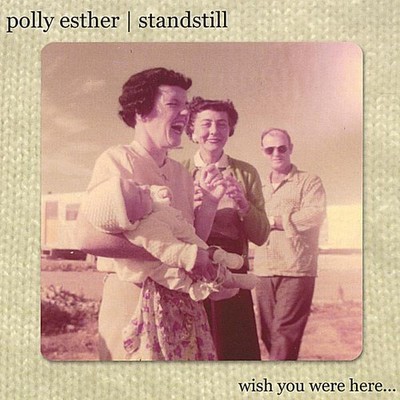 Polly Esther: Polly Esther was formed in Ft. Lauderdale during the summer of 1999 by Raf Solorzano (guitar) and David Farache (drums). After writing several simple songs with uncommitted band mates, the pair quickly recruited vocalist Josh Katzker and bassist Justin Brackett. With the new lineup came new influences and the band¹s music began a slow transformation from simple pop-punk songs to a more seasoned and mature rock sound. Blending the raw energy of their punk roots with the unbridled angst of eighties rock/metal bands, the band created a sound both hard hitting and melodic. In 2001 the foursome relocated to Central Florida where they began to expand their rapidly growing fan base. Now playing out all over the state of Florida and with a month long tour of the Eastern U.S. under their belts, the band was becoming known for their incredible live performance. Bringing a fury to the stage rarely seen on the underground punk circuit, Polly Esther is continuing to grow in popularity, musicianship, and desire. Polly Esther has released a four song demo and a split CD on California-based indie label, Missing Words Records. They are now, more than ever, ready to revitalize the world of rock music. Standstill: '96 was my freshman year in high school, and that was when I met Jesse. Picture a scrawny little guy with long frizzy red hair past his shoulders, he wore nothing but black clothing and I distinctly remember this necklace he wore, it was a piece of string with a fork hanging from it weird! Jesse and I quickly became friends and we started jamming together in my back yard. In those early days we used to both plug (our guitars) into this old beaten up 3-channel keyboard amp Jesse had. Between the distortion I cranked out of my Digitech RP-5, and his Boss Metal Zone it was possibly the most awful sound you have ever heard. The third channel on the amp was reserved for the microphone we used. So we would sit in my backyard and play Bush or Nirvana songs and take turns singing for hours or until someone called the cops, which is usually what happened. It was fun though, and that's when we first decided we wanted to start a band together. Time went by and so did several of our haphazard attempts at a band until the Methane Gerbils (I'm embarrassed to use that name now so I'll just say MG for the purposes of the story). MG consisted of me playing guitar and singing, Jesse playing guitar as well, Donny playing bass (although Donny didn't play the bass), and kid name Mat Jimmerson on drums. We practiced in Mat's garage, wrote a few songs, and even had stickers that we made ourselves (if you've got one of those burn it please). Although we talked about being a band a hell of a lot more than actually 'being a band' we had fun while it lasted. So while MG was on the decline, Jesse, Donny, and myself all knew we still wanted to be in a band. That's when we decided to ask Auggie to play drums for us. His band Spunkie Morton had just broken, despite achieving a pretty good level of popularity locally. Auggie said yes, and in November of 1999 we had our first real practice in Auggie's garage. Standstill is born. With the majority of our songs carried over from MG and few new ones, on December 12th 1998 we played our first show at SFX Skate Park in Pembroke Pines, Fl with The Agency, Bum Ruckus, and United82 (RIP). It being our first show there was a pretty good turn out amongst our friends. However, by the end of our set it was obvious the music still needed some honing basically we sucked, but we got better. By February of 1999 we were playing shows every weekend, with bands like: Foolproof, Caught Inside, Milkshed, New Found Glory, Bigwig and more. Everything seemed to be going well, however the circumstances of the time were un-yielding and the band was forced to call it quits. Basically we fought way too much, and so we all went off to play in other bands. In April of 2000, nearly a year and a half later, the four of us decided to get together and jam just for fun, but this time it was different we were writing good music and really enjoyed playing together. So we decided maybe it was time for one of those nostalgic reunion runs. However, it obvious something was missing a great vocalist. Donny suggested we try out a guy he knew, Justin. After just one practice we knew we had found the right guy. Standstill is reborn. So with the new and improved line-up, we embarked on a rigorous writing mission, proceeded to record the 'Music in the First Person' EP and now the saga continues.

Here's what you say about
Polly Esther - Wish You Were Here.