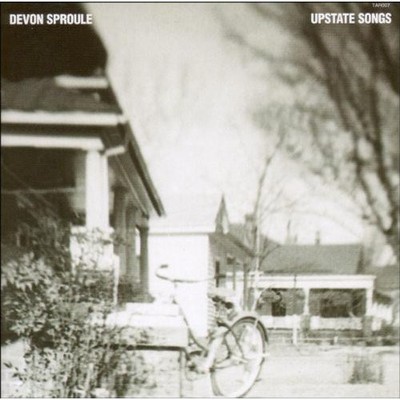 "Perhaps the sweetest and most honest folk-pop album recorded this year." -- ROLLING STONE With the release of her third CD, Upstate Songs, rising-star Devon Sproule joins the growing roster of artists on City Salvage Records, the independent multi-media label out of Brooklyn, New York. Released on June 3rd, 2003, Upstate Songs features a collection of bright, sparsely arranged compositions and represents a new direction from the grittier, electric sounds that gained Sproule national recognition with the release of her previous two albums. Raised on Canadian folk music, dead teenager ballads from the 50's and the Beatles on a 465-acre commune in rural Virginia, the twenty-one-year-old Sproule began touring nationally at the age of sixteen, sometimes performing with the accompaniment of a rock band. Although the rock-influenced sounds featured on Long Sleeve Story, released in 2001 and produced by Dave Matthews Band bassist Stefan Lessard (who also appears on the record) brought Sproule's name to the public eye, it is the music on Upstate Songs that will establish her as a considerable, mature songwriting talent. In 'Plea For A Good Night's Rest,' the album's opening track, Sproule measures a good night sleep as a reward for a day well-spent and a life well-lived. Accompanying herself on acoustic guitar, Sproule's angelic voice sings, 'Sleep she comes to steal the ones who/Fill their glass and leave the rest/Whose teeth get brushed, who eat enough/And know how to treat their friends.' The brave "Come Comet or Dove" recalls the summer Sproule spent writing and recording Upstate Songs in Woodstock, NY, steeped in the legacy of an acoustic Bob Dylan, Shakespeare in the park, and the hushed pickings of a young Nick Drake. Sproule sings, 'The heat had set in as the summer began/ I had just ceased to sing winter's sore tune', The Donaldson/Kahn-penned standard 'My Baby Just Cares For Me' is accorded a sparkling, gleeful treatment by a young artist with, in addition to her own obvious songwriting abilities, a comprehensive appreciation for American popular and folk song traditions. 'Upstate Songs is devastating: a beautifully understated album, haunting yet full of joy. Devon Sproule is fearless,' says tour-mate and creator of FOUND Magazine, Davy Rothbart. Sproule has also toured and/or shared stages with the likes of: Dan Bern, Erin McKeown, Mary Chapin Carpenter, Dave Matthews Band, and Kelly Joe Phelps. Rolling Stone's "Critic's Top Albums of 2003" called Upstate Songs, "Perhaps the sweetest and most honest folk-pop album recorded this year." Critic Julie Gerstein recalls being "blown away by Devon's live performance,' she says. 'She brings something special to the genre...a sense of sweetness, innocence and clarity. Sproule's live concerts capture her at her best: candid, poetic and with stage presence that is at once youthfully charming and self-possessed.

Here's what you say about
Devon Sproule - Upstate Songs.