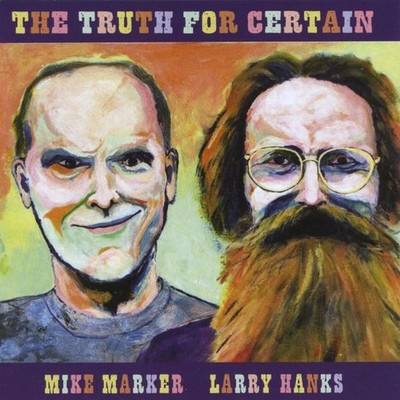 THE TRUTH FOR CERTAIN Larry Hanks & Mike Marker Reviewed by Deborah Robins 2003 If there were ever a CD to take along on a road trip, "The Truth For Certain" would be it. Right from the start of the rollicking and bombastic, "Lonesome Cowboy's Breakfast" written by Hank Bradley and Larry Hanks, the listener is poised for a wide variety of Americana highlighting the good, bad, and ugly of our culture. One of my favorite and lesser known Stephen Foster tunes, "The Glendy Burk" is kicked into high gear when Hanks joins in with his basso harmonies, the banjo's jaunty spot-on fills, transport us to another era. Larry Penn's "Maquiladoras" is an example of Hanks at his finest. He literally jumps rather than eases into this song which draws the listener into a bittersweet lament. In classic Hanks style, we can clearly discern and digest every word as it is delivered in real time, keeping us riveted in order to be a part of the big picture painted in nuanced strokes. Old fiddle tune, "Mississippi Sawyer and Westfork Gals" is an instrumental which features the neat banjo picking of Mike Marker, and the boisterous Jew's Harp work of Larry Hanks. Uncle Dave Macon's "I'm Going Back to Dixie" supplies a strong, straight-ahead rendition, with excellent and restrained harmonies by Marker. The trick bag of covering a well-known song like Leadbelly's "Relax Your Mind" comes from the natural tendency to compare both renditions. And although one always wonders about the value of re-recording such chestnuts, it's always fun to hear Leadbelly reinterpreted. Mike Marker's lead vocals ease beautifully into this blues with a wail in his voice, which actually works well in such a laconic piece. A musical equivalent of the film, "My Man Godfrey", "The Panic is On" is exactly the kind of song Larry Hanks selects again and again: funky to sing, fun to hear, and cloaked in musicality which nearly steals the thunder from the message. A song popularized by uber-Minstrel, Dan Emmett, "Jordan is a Hard Road to Travel", is a good choice for Marker's front porch delivery. The words are cute and clever, the banjo work propellant throughout. The album includes Mike Marker's extensive liner notes giving some background on this song. For my money, Hanks and Marker's voices and harmonies were born to perform this song together. Another Leadbelly song, "Titanic" fits well into the eclectic variety of this album. Marker's 12-string adds a nod to the song's pedigree. "Needlecase & Liza Jane" treats the listener to another bouncy ride courtesy of Hanks' masterful Jew's Harpery. Malvina Reynolds, fellow Berkleyan and most deceivingly profound songwriter, is often remembered for her musical eco-political statements. Fraught with poetic and melodic beauty, "The Fragile Sea" bemoans the causes and effects of water pollution. This is a lovely, sensitive song sung with warm reverence by Marker with restrained and lovely harmonies by Hanks. Larry Hanks had opportunity to experience the essence of Elizabeth (Libba) Cotten firsthand having traveled as her accompanist on one of her final tours. "Going Down the Road Feeling Bad" which also incorporates Cotten's "Vastopol" is delivered with a kind of standard-issue folkie treatment-however easily listenable, just unremarkable. "High and Lonesome" is exactly the kind of song that makes Larry Hanks such a beloved performer: he tells us a story that sounds like he could have lived it-plausibly, and with intelligence. Mark Graham crafted a wry piece sung ala Utah Phillips. One doesn't generally associate such a sprightly two-step with a deliciously nasty little song about Richard Nixon, however David Holt's "Too Late to Pray" delivers, thanks to Hanks' and Marker's caustic inflections.

Here's what you say about
Larry Hanks - Truth for Certain.