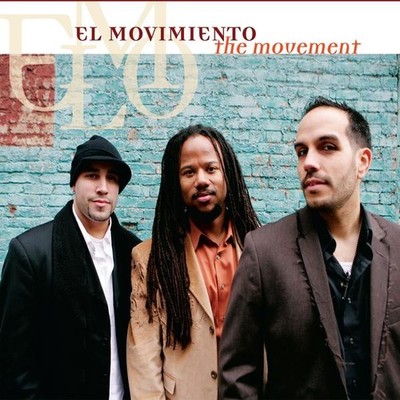 The album features twelve tracks of original and contemporary Latin jazz compositions written and arranged by the band's leaders - percussionist Giovanni Rodriguez, trumpeter Imer Santiago, and saxophonist Rahsaan Barber. The trio behind ElMo's signature sound is joined on this album by five phenomenal musicians - guitarist Adam Agati, pianist Paul Horton, bassist Dan Eubanks, and drummers Derrek Phillips and Marcus Hill. The fact that every musician featured on 'The Movement' currently calls Nashville home makes a strong statement to those who think of Music City as a town of country songs and cowboy boots alone. The album, recorded last October in Nashville, displays influences traced to the the musical legacies of Latin jazz and world music hotbeds including New York, Puerto Rico, Cuba, the Dominican Republic and Africa. However, quite a few of the band's qualities set it aside from many of their varied influences and contemporaries. Percussionist Giovanni Rodriguez notes, 'This band has a soulfulness to it - an emphasis placed on communicating something meaningful to the listener through each and every note played.' Trumpeter Imer Santiago speaks to another quality of the 'ElMo sound' - a lyrical melodicism, adding, 'There is definitely a vocal approach to the construction of each melody. We favor memorable and emotive melodies. We've got it right when we're singing it to ourselves three days after the gig.' Saxophonist Rahsaan Barber believes the band's crafted arrangements also add another layer of enjoyment for their listeners, stating, 'While living in Manhattan, I was able to play with many giants of the Latin Jazz world including Carlos 'Patato' Valdez, Andy Gonzales, and Bobby Sanabria. I learned much of their music from the inside out, often playing the same arrangements of Latin jazz standards that Tito Puente, Chico O'Farrill, or Machito performed many years ago. El Movimiento employs those rare, cherished lessons and experiences in a very savvy way when it comes to constructing arrangements for our compositions.' And so, the septet's journey has taken them to the accomplished release of El Movimiento's first CD, The Movement, after starting out as a rather informal collection of young friends joining forces each week at a local coffee house to, simply put, create music the way they heard it, without any constraints or preconceptions. In the very fast two years since that humble beginning, El Movimiento has gone through an amazing refinement and reformation which has proudly led them to this historic release!

Here's what you say about
El Movimiento - Movement.