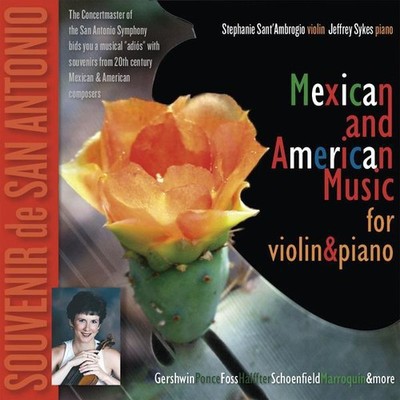 This compilation of 20th Century Mexican and American music is an exciting pairing of composers not often heard together. Stephanie Sant'Ambrogio, violinist for the Reno-based Argenta Trio and Artistic Director of the Cactus Pear Music Festival, and pianist Jeffrey Sykes, who is an acclaimed soloist and chamber musician, bring this interplay of musical cultures to vivid life. You will hear classic favorites like Gershwin's It Ain't Necessarily So and Ponce's famous Estrellita and at the same time be introduced to incredibly virtuosic gems such as Paul Schoenfield's Four Souvenirs and Rudolfo Hallfter's Pastorale. With the romantic melodies of songs by Amy Beach and Marroquin, and the contemplative sigh of Kevin Puts' Air, this CD takes the listener on a musical journey of emotions. Don't miss the ride! Stephanie Sant'Ambrogio, violin, formerly Concertmaster of the San Antonio Symphony and First Assistant Principal Second Violin of the Cleveland Orchestra. Praised as an 'expressive and passionate chamber musician', she has performed as a soloist and chamber musician throughout the U.S. and in the countries of Estonia, Sweden, Ghana, Italy, Peru and Mexico. She made her solo debut with the St.Louis Symphony Orchestra in September 2003. Jeffrey Sykes, piano, is Artistic Co-Director of Bach Dancing & Dynamite Society, Music Director of Opera for the Young, and a founding member of the Painted Sky Music Festival. He is acclaimed as 'a commanding solo player, the most supportive of accompanists, and a leader in chamber music.' Recently completing his tenth CD, he is in great demand as a chamber musician and has concertized throughout the U.S., Canada, Mexico and Western Europe. Dr. Sykes received awards to study in Austria and Germany and received his DMA in Music from the University of Wisconsin-Madison. Stephanie and Jeffrey have collaborated in making music for over a decade. This is their first studio recording together.