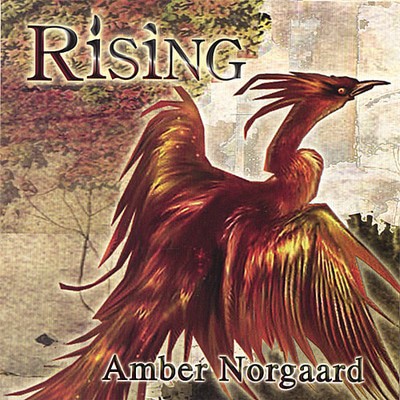 RISING album review in the December '06 issue of the Tucson Lifestyle Magazine: 'Though Amber Norgaard's recent CD is called Rising, the truth is that her star has been ascending for quite a while. Solo, or with her band, she has proved to be a singer/songwriter to be reckoned with. Touchstones for her sound include Indigo Girls, Dar Williams and Carole King, but she certainly isn't an imitation of anyone. Her guitar playing rings with authority, and her voice is strong and confident, pretty but never sappy. The 12 tracks on Rising chart a course that is both personal and universal. Listeners can sense the specific incidents behind a song like 'Turquoise Sea,' yet it's message of finding someone who is a port in a storm applies in so many circumstances. 'Hell Town' shows off her blues chops, 'Rectify' rocks steady and 'Sweet Laughter' demonstrates that Norgaard writes introspective ballads on par with the best in the business. Standouts include the unpretentiously profound 'Dark & Light,' the hopeful 'Not Too Late,' and the title track, which quietly unfolds in a way that would make it perfect for a film soundtrack.' ABOUT AMBER... Described as "the love child of Natalie Merchant, Sarah McLachlan and Melissa Etheridge," Amber often has audience members inquire how such a big voice and dynamic energy can come out of such a small person. A Tucson venue describes Amber as "truly a great songwriter and performer." The Iowa Entertainer comments, "Her lyrics don't paint a picture, they grab your arm." Hailing from the Iowa plains, Amber ventured off the family farm with a burning desire to see the world. She graduated from Creighton School of Nursing in Omaha, Nebraska, headed south with guitar in hand to do volunteer work in the Dominican Republic, then to the Northwest, traveling as a full-time volunteer to Oregon and Alaska. Eventually, she settled in Alaska for six years, working as a nurse in the southwestern Alaskan bush. With her third paycheck, she mail-ordered her first digital keyboard. The long, dark cold nights, mixed with the extreme Alaskan lifestyle, proved to be nurturing for a young songwriter's soul. Just prior to Winter Solstice 2003, Amber departed her Alaskan lifestyle and headed to the Sonoran Desert. This time, she had partially recorded song tracks in hand and had recently placed as a semi-finalist in the Alaska Public Radio Song of the Year Contest. In July 2004, she released her debut album, "SOUL IN MOTION". In May 2006, she released her full-length sophomore album titled "RISING". Amber has toured nationally throughout the Southwest, the Pacific Northwest, Alaska, the Midwest, Texas and the Massachusetts Cape. She has performed in events such as the Alaska Women's Music Festival, multiple pride festivals and folk festivals, the P-Town Women's Kickass Independent Songwriters' Showcase and the Invasion of the GoGirls at SXSW. Amber's music is a mix of folk, pop and rock. Written with well-developed, honest lyrics, her songs address the human experience--touching on issues ranging from relationships to social injustice. 'Rising' was produced by Jim Pavett at Allusion Studios (Tucson, AZ) and co-produced by Amber. The album features phenomenal performances by members of Amber's band: Doug Floyd on electric guitar, Jay Trapp on bass and Jim Pavett on drums. Other musicians featured on the album are as follows: Rob Paulus on fretless bass, Richard Katz on keyboards, Michael Gilbert Ronstadt on cello and back-up vocals contributed by Dave Manning, Louria Matlock, Elbert Jones and Maria Johnson.

Here's what you say about
Amber Norgaard - Rising.