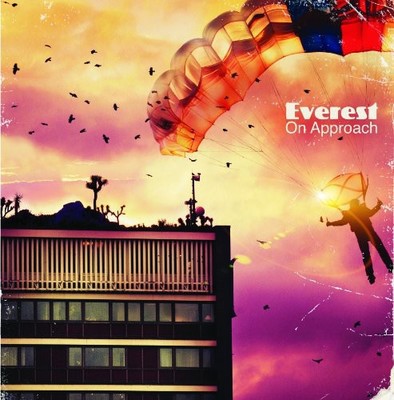 On Approach is a bold album that bolts out of the gate with an enveloping sound capable of filling large spaces, both in the outside world and between one's ears. In broad strokes, it hits the sweet spot between stratospheric, stadium size rock and gorgeous, emotionally charged pop craftsmanship. From infectious and thumping opener "Let Go" through heavy rocker "I've Had This Feeling Before," the sweet humming, "Keeping the Score," the naked romance of "Dots," the haunting, spacious roots rock of "East Illinois" and "Fallen Feather," and culminating in the boiling over cascade of closer "Catalyst," on Approach moves with a focused, switched-on intensity that announces the arrival of one of the most engaged rock units today. On Approach isn't just an assemblage of random tracks, but a classic two-sider vinyl kind of album, where the full resonance and weight of it can only be felt by taking the full ride. Everest is this sort of band, too, one that strives for something more than three-minutes in the spotlight. These guys are lifers and the music they make is built for lifetimes, maintaining some elusive core that rewards one with each new spin. With guitars that range from bright and chiming to tense and meandering, harmonies that are both delicate and pastoral, and Pollard's gentle, hazy vocals, on Approach is indeed reminiscent of a bygone era, a time before the Internet, when albums were still an art form and stories were told on vinyl. But as it exudes timelessness, as it ebbs from rustic grooves into hushed lullabies, it also asserts itself as something very of the here and now - something that is more than the sum of it's parts.

Here's what you say about
Everest - On Approach.