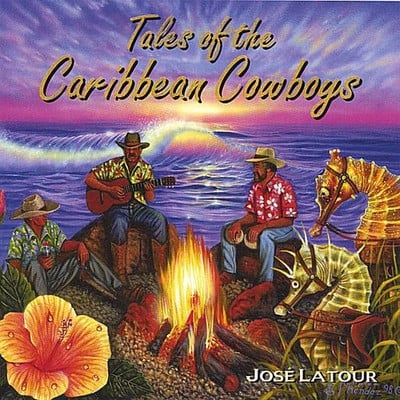 ABOUT THE ARTIST: Jose Latour has a globe-trotting history behind him, and this is precisely what gives him the experiences behind his enchanting storytelling. A native of Cuba whose family fled Castro's Cuba when he was four, Latour sings touchingly in both English and Spanish. His professional career is remarkable: after being appointed as U.S. Diplomat by President Ronald Reagan, Latour worked in Mexico and Africa, where he was first exposed to African Music. Leaving the U.S. government three years later, Latour built a highly successful law practice, establishing offices in the Far East. He recorded his first two projects while running a full-time law practice with over 15 employees and in 2002 sold the firm to pursue his music 'with a full heart'. An intense student of lyrical composition (what he calls 'the art of making one song paint a thousand pictures'), he writes with a concise, flowing style with enough quirk and color to amuse his listeners, but centered around pop/country/Latin roots which makes you smile and move from the first moment the you hear a song. Citing his primary muslcal influence as Jimmy Buffett ('I was 14 the first time I heard 'Come Monday' and I have since been riveted by the man's music and stories'), he was initially taken aback when a South Florida journalist described him as a 'Cuban Jimmy Buffett'. 'Freedom Flight', his opening track on the Orfeon/Sony CD (later re-released by Latour's label, Paradise Records) is certainly reminiscent of early Buffett, but that's about it. But when you sing about the islands and fishing and sailing and boats and third world sleazes...well, you can see why the analogy has stuck (and that's without even getting into the fact that he is also a pilot and a seaplane nut...Latour BUILT one several years ago!! While he considers the Buffett comparison 'the ultimate compliment', Latour is quick to point out that his writing sensibilities have been shaped by a very diverse group: 'I think that since music needs to be labeled to be sold, the Buffett analogy is inevitable when critics and product marketers have to hang my hat somewhere. It was precisely the fact that my music was part pop, part Latin, part country, part folk that drove Sony's marketing people crazy and I was told to remove the English language tracks in the original release of 'OceanO'. But I get concerned that a new listener who finds my music via online referral might expect some kind of mirror of JB's music, and my stuff is ALL over the place. Lyrically, Steely Dan, James Taylor and Billy Joel have been even greater influences...stylistically, my travels and tastes have made me very experimental, and people like Peter Gabriel and Paul Simon have been infinitely more influential. When Paul's 'Graceland' was released, it literally transformed my way of hearing music...' All and all, like Buffett, Latour is capable of wrenching your heart, cracking you up, and educating you all in the span of one song. Perhaps what he has in common most with Buffett is his ability to connect intimately with his audience, the primary requirement of a globe-trotting troubadour. Considering what Latour has accomplished musically while dabbling in it part time, expect great things from his new-found dedication to his artistic career. ABOUT THE MUSIC 'Tales of the Caribbean Cowboys' is Latour's third recording and his first album recorded completely in English. Fresh, fun, humorous and full of insightful lyrics describing the places he holds dear (the Florida Keys, Cuba, etc.), 'Tales' reflects that reality of what Latour has claimed since beginning his recording career in the early 1990s: he can sing in Spanish, but his groove and musical sense is pure Americana 'with a hearty dash of the spicy tropics'. The album brims with Latour's multicultural Caribbean mish-mosh, and if you've heard his earlier stuff, you'll immediately realize how much he must have relished the artistic freedom of producing 'Tales' via his independent label, Paradise Records. (His prior recordings - both in Spanisn and in 'Spanglish' -- were major label releases from Polygram Latin and Orfeon/Sony.) Latour has an absolute lyrical ball here, whether bashing carousing Europeans looking for hookers in Havana with the funky tropical groove('On the Island'), expressing his exasperation with love with catchy, hook-filled pop ('See You Later, Jose'), or drawing heart-melting love analogies in quiet ballads ('Once in a Blue Moon'. ARTIST COMMENTS: I just want to thank you for being here and tell you that I really do appreciate your support of my music (or your CONSIDERING my music). When I had my first song on the Polygram CD, it was considered a fluke and the press I got -not much - focused on the singing lawyer concept. Hooboy. When Sony released 'OceanO', there was much more press, what with it being a full CD...but the 'lawyer' thing was still there. It was not till I released 'Tales of the Caribbean Cowboy' on my own little Paradise Records that I finally was able to read commentary that was less about my being a lawyer and more about my lyrics, style, and music. I hope the upcoming 2006 release -- the product of 4 years of blood, sweat, and tears -- will further take my music to where it should be. The coolest thing to happen in a long time was to fnd out that some of my songs are being downloaded as RINGTONES in Japan...is that amazing or WHAT?? Anyhow, whoever you are, wherever you are, I would love to hear from you, so if you want a cool CC sticker or something, or just want to chat, email me at [email protected] still have time to answer my own emails...(-:.

Here's what you say about
Jose Latour - Tales of the Caribbean Cowboys.