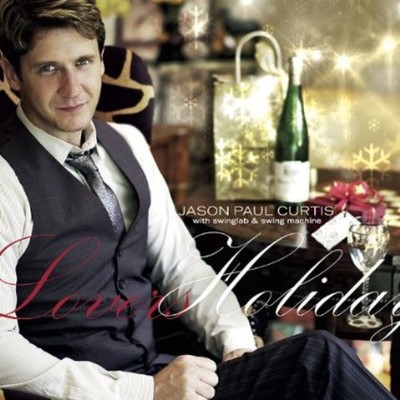 'Take great vocals, solid originals and the elegant sound of a swinging big band and you have a can't miss release in 'Lovers Holiday'!' @CriticalJazz.com 'Lovers Holiday' was born of necessity for new Christmas songs. Swinglab (pianist, Ray Mabalot, bassist, John Dahlman and drummer, Woody Hume) and I played four nights a week the month of December, 2011, to sprawling Christmas crowds at Washington DC's National Harbor. We soon learned that an hour set of Christmas jazz standards (great as they be) runs a little thin after the first 'Winter Wonderland'. We found that mixing in standards, especially ones with wintery lyrics, struck a balanced chord that both adults and kids liked to hear. As soon as January, 2012, I began writing the first few new songs for an album idea. 'Lovers Holiday', the title track, was one of the first. I wanted a song for couples with kids, couples who spent holidays trying to find each other again and share that romantic moment. 'Let's take down that bottle that we've been saving since June' just sort of says it all when 'the kids are asleep, there's nowhere to be, and no one but you and me and this firelight.' This one is dedicated to my wife, Aljith, and I believe it's the heart and soul of the whole album. 'Blue Friday' came as a sort of reaction to the insane shopping day, Black Friday, the day after Thanksgiving. I imagined a good-natured guy with his love, hitting the stores at four in the morning, dodging the crowds and saying, 'all I think of is tonight, a quiet dinner, candlelight, Mariah really got it right - all I want is you..' 'Winter Wind' and 'Good This Year' are both in the sort of 'Let it Snow' tradition - light whimsy couples love in the snow and through the holidays. Nothing too serious here, and very creative piano work by Ray Mabalot on both. 'Our Time of Year' came straight out of Brooklyn, where my wife and I visited her parents our first November together. I wanted a high energy, fun, romantic swinging big band tune that captured the turning Autumn to Winter. Fortunately, I met Scott Ragsdale, a fantastic arranger, who put together my vision of this for me and Swing Machine (DC's flat-out best big band). Special thanks to all the players, soloist Pete BarenBregge and to manager Geoff Peterson for letting them sight-read for the album. Scott also arranged, 'I Got my Love to Keep me Warm', inspired by club mix of the Kay Starr original recording. I've always loved that tune, and I'd like to think Irving Berlin would be proud to hear our neo-60's version. I wanted a new 'Let it Snow' with somewhat of a 'Triplets of Bellville' feel to it, and drummer Woody Hume excels at inventing new rhythms from the familiar. 'You'd be So Nice to Come Home to' and 'In the Still of the Night' - both by Cole Porter - captured, I thought, that winter's night feel with and longing for your love. Especially in 'Still of the Night'; I'm admittedly channeling Julie London's version, and John Dahlman's solo bass work in our version still floors me. Good example here of what I learned performing Christmas jazz live - mix in some standards. 'You're Something' is not a Christmas song, either, but I love Steve Allen's lyrics: 'You're wonder, you're snow on the trees in the winter, you're sleighbells, you're music and perfume and wine..' Who would've known such a nice tune was out there. I only heard 'The Christmas Waltz' for the first time two years ago, and while Sinatra's version is classic, I wanted something a little faster and in 6/8, much like Swinglab and I did with Vince Guaraldi's 'Christmas Time is Here'. Dave Schiff added elegant sax solos throughout as well as clarinet in 'Winter Wind'.

Here's what you say about
Jason Paul Curtis - Lovers Holiday.