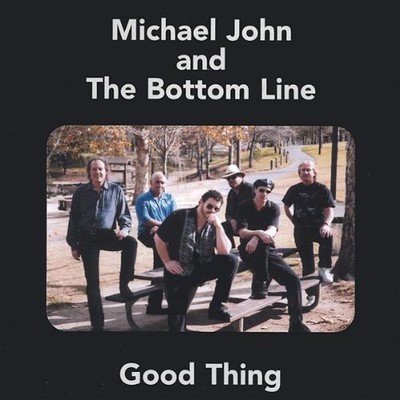 Michael John, a very soulful artist who's vocals have a lot of raw power and emotion will readily attest to the legitimacy of his band as an up and coming force in the blues industry, mark my words. Jon Hayes- Southland Blues Magazine The combination of Michael's strong soulful voice and the well oiled machine,The Bottom Line makes this one of the best pumping blues CDs that have been around in a long, long time. Born May 23, 1960 in Venice Beach, CA Michael John grew up listening to a variety of music however; he knew at an early age his music love was Blues. In the early eighties he joined one of Southern California's favorite blues bands, The Back Pocket Blues Band, he was turned on to the contemporary side of the blues and there was no turning back. Michael John's influences are many, and since the days of Back Pocket he has had the opportunity to meet and share the stage with most of them. Such as Buddy Guy the late Junior Wells, the late Albert Collins, the late Willie Dixon, Otis Rush, Lonnie Brooks, and recently with the Bottom Line they have performed with The Robert Cray Band, Taj Mahal and The Phantom Blues Band, The Fabulous Thunderbirds, Robben Ford, Bobby 'Blue' Bland, Dickey Betts, Savoy Brown, Rod Piazza, Sonny Rhodes, Tommy Castro and his very close friend Coco Montoya who has not only influenced Michael and his music but also took part on his debut CD 'Can't Tell Me'. Michael was recently asked during a radio interview if he had to point out only one thing so far in his musical career that helps him to keep the music alive and to keep the drive what would that be? He said 'Without a doubt it would have to be a benefit we performed at in the mid 80's for Willie Dixon and his Blues Foundation at the Music Machine in Santa Monica, CA. After our set, I was hanging out back stage and peaked over at Willie, right at that time he made eye contact with me and waved me over to his table, when I approached his table he put his big arm around me and said 'Man, you's a damn good singer, don't you ever stop singing the blues.' And I tell ya it was like being blessed by a king. I will never forget the memory of meeting one of the greatest men in the blues and him taking the time out to tell me that, God Bless Willie Dixon'. Since the release of their second CD 'Good Thing' it has been receiving positive reviews and getting airplay on radio stations throughout the United States. Michael John's strong soulful vocals are without a doubt his main instrument while showing a style all his own on the Harmonica. This CD is a steal for $11.00 Go check out their web site michaeljohnandthebottomline.com.

Here's what you say about
Michael John - Good Thing.