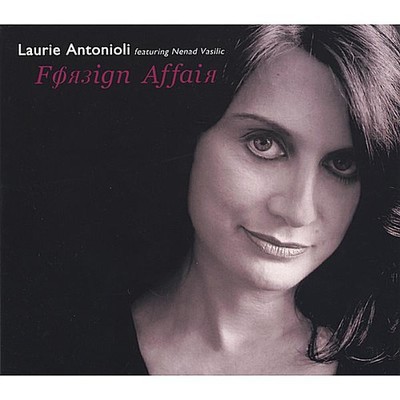 Jazz Podium December 2004 Matthias Weiller Between the tradition of the Great American Songbook and the better class of pop song there's no shortage of women singers - some acclaimed as new divas while others, measured against Ella & co, are found wanting. But only a few women are carving out new paths of a contemporary vocal jazz. Laurie Antonioli is a Californian with Montenegrin ancestors, now a university teacher in Graz, who is able to weave classic jazz singing, modern instrumental-sounding vocalizations and elements of Balkan folk into a valid vocal language of her own. Her influences are not only such diverse singers as Louis Armstrong, Joni Mitchell, Neil Young, Bobby McFerrin und Mark Murphy, but also include instrumentalists like Miles Davis, Wayne Shorter, Keith Jarrett und Joe Henderson. She made her debut on albums of pianists George Cables (â??Soul Eyes', 1985) and Joe Bonner (â??New Beginnings', 1987), and after that, family and teaching interests took priority. With the dark timbre of her voice she can converge with the bass sound of Nenad Vasilic or equally, in higher registers with the fine, sweetly sculpted lines that Johannes Enders produces on the soprano sax. The whole recording lives in the matured sound of an uncluttered instrumental lineup. Antonioli carefully selected the collaborators for her distinctive project: Johannes Enders, individualist on saxophones, Nenad Vasilic, tersely phrasing Serbian bassist and co-composer, Armend Xhaferi, Albanian guitarist who works with bending techniques from blues and country, and John Hollenbeck, the stylistically adaptable percussionist from New York. Highlights are the tracks where Antonioli enjoys extended scats, oriental-mystical and deftly rhythmic on Vasilic's 'Tschusch Chochek', bluesy on Antonioli's own 'I know you' and entranced-swinging on Keith Jarrett's 'The Cure'. FonoForum CD of the Month - November 2004 Berthold Klostermann Music ***** Hi Fi Check ***** The European debut of a Californian singer of Yugoslav descent. Balkan music was in the soundtrack of her childhood, she got to know jazz through Louis Armstrong records. Later she broadened her horizons to include modern jazz, folk and world music. Now Laurie Antonioli is pulling these strands together. In Graz she met the Serbian bassist Nenad Vasilic and made him the backbone of her band; three of the pieces on this album are from his pen. The band is competed by an Albanian guitarist, a drummer from New York and the saxophonist Johannes Enders from Munich, who is known as one of the most versatile German jazz musicians. The recordings were done in an analogue studio; Jay Newland, Grammy winner for his work with Norah Jones, supplied the mix. The effort has paid off: the album places Antonioli's dark, sensual voice in a perfect setting. The experience of being separated by borders and the longing to overcome them are common themes of these songs. Dissolution of borders is already evident in a band where an Albanian plays next to a Serb. Musically, the singer crosses the boundaries between styles and cultures, folk and jazz, east and west. In jazz, she borrows from Joe Henderson the composition 'Black Narcissus' and adds a Serbo-Croatian text, or scats to Keith Jarrett's groove 'The Cure'. The folk-song-like 'Where Flamingos Fly' is combined with the traditional 'Black is the Color' to make an American Folk-Jazz medley, while Vasilic's compositions live in their Balkan melodies. Such an organic and original combination of all these elements is seldom achieved.

Here's what you say about
Laurie Antonioli - Foreign Affair.