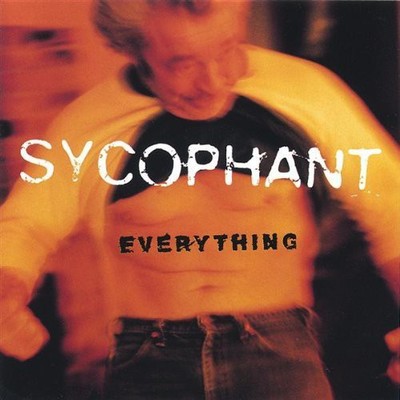 A Brief History of Sycophant 1995-1996: East coast native, Gavin Protas (guitar) and Missoula's Paul Moomaw (acoustic bass) begin playing Seattle coffee shops, pubs, and parties. Within a few months Seattle's Capitol Hill neighborhood is abuzz over their telepathically tight harmonies and alternately melancholy and upbeat, bluesy songwriting style. Soon, Martin Klabunde is added on drums, and for no reason anyone can remember, the band is christened Sycophant. Their first self-released CD and cassette, 'Feel' launches a dedicated fan base, and is praised by local music critics. 1997 - Klabunde is replaced by Ottoman Bigwigs drummer, Ron Carnell. The acoustic rock trio's first performance is at Seattle's Showbox, where they win a National Academy of Recording Arts and Sciences (NARAS) showcase for a 'pre-Grammy' competition in LA. A couple weeks later, at Hollywood's Billboard Live Club, Sycophant competes against young ska/swing act, Save Ferris and several other west coast bands for a spot at the Grammys in New York. The band didn't win this showcase, most likely because the event was rigged. 1998 - A few Portland shows along with regular gigs in Seattle continue, including slots at the Showbox with R.L. Burnside and later that year, Shane McGowan. Demand for the lively, beer and Bushmills-soaked act increases, as Sycophant routinely sells out local nightspots, including the Crocodile, Tractor Tavern, and Breakroom (now Chop Suey). Live show reviews in the Stranger and other rags begin discussing the band's local appeal and possibilities, one critic even wondering what was taking labels so long to come forward. A Seattle label eventually offers a somewhat generous deal, but Sycophant inexplicably decides not to sign, and their self-released CD, 'Everything' is shipped through Portland's Nail Distribution. With no label, almost no live shows, airplay, or press outside Seattle, the CD manages to sell over a thousand copies in just a couple months. 1999 - A live CD is recorded throughout two sweaty nights in July at Seattle's Sit 'n Spin. The CD is mostly given away by band members or sold for $5 at shows. With no tour support and inconsistent management, Sycophant lacks resources to expand their fan base out of town. Conflicting career decisions and the usual differences experienced within countless other bands begin taking root within Sycophant. Rumors of breakups are in the air, as the band plays steady, but less enthusiastic performances. Finally near the end of the year, Sycophant calls it quits with a 'last show' blowout at Capitol Hill's Elysian Brewery. May 5, 2001 - Protas, who has been living in LA with his fiance', swings through Seattle on his way to Portland, Maine. It's decided in advance that a farewell show at Ballard's Tractor Tavern is a good idea. Sycophant performs with the precision and spirit they had at the top of their game and goes out with a bang, as 300 or so of their most loyal friends and fans pack in for one last whiskey and longneck-fueled party. Hope 'Everything' goes well for you.

Here's what you say about
Sycophant - Everything.