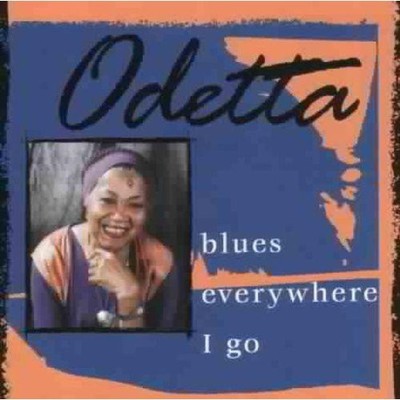 On September 28, 1999 M. C. Records released Blues Everywhere I Go, Odetta's first full-length studio recording in fourteen years. The recording was anticipated anxiously by lovers of folk, blues and American roots music and the loyal following that this legendary singer has amassed over her fifty-year career. Backed by a full band that includes guitarist Jimmy Vivino and bassist Mike Merrit (Conan O'Brien), Odetta conjures the ghosts of Bessie Smith, Memphis Minnie, Alberta Hunter, Ma Rainey, among others, and passionately recreates the mood and the meaning of urban blues of primarily the 1920's and 30's. Dr. John joins Odetta on two songs, including a vocal duet on the Percy Mayfield classic "Please Send Me Someone to Love. " Poet laureate Maya Angelou has written an introduction to the CD, and the liner notes are by acclaimed music writer Robert Gordon. One of the most beloved figures in American music, Odetta's show business career started in 1949 with the production of "Finian's Rainbow. " Odetta became a national spokeswoman for American roots music in the 1950's and ushered in the tidal wave of folk music that followed. Odetta introduced'Americans and audiences worldwide to the power and dignity inherent in the stories that comprise American roots music and especially African-American folk, blues and gospel. She paved the way for Bob Dylan and Joan Baez and has been credited as a crucial influence by numerous artists from Janis'Joplin to Cassandra Wilson and Jewel. Odetta has shared the stage with Bob Dylan, Joan Baez, Nina Simone, Marian Anderson, Pete Seeger and B. B. King to name just a few luminaries. Odetta has been featured on many television broadcasts including CBS's "Sunday Morning" and PBS's "Salute To'American Pop, " and has charmed and moved audiences at the White House, The United Nations, the Kennedy Center and Carnegie Hall. As Harry Belafontehas said of her, "Odetta is a vast influence on our cultural life. "'

Here's what you say about
Odetta - Blues Everywhere I Go.