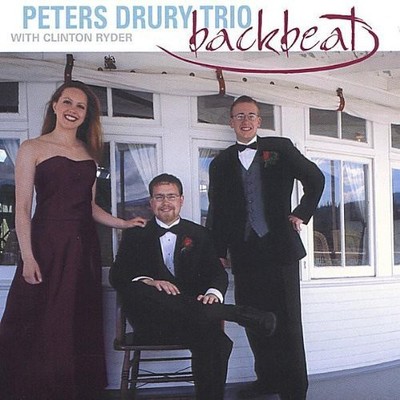 'A vibrant, fresh approach to jazz; energy and exuberance on stage that's infectious!' - these are ways audiences describe the experience of hearing the Peters Drury Trio in concert. Says Shelagh Rogers, of CBC Radio, 'I was electrified the first time I heard the Trio . . . I love the fact that three people so young have such a mature and sophisticated approach to the music which they so clearly enjoy. They are a national treasure.' The Peters Drury Trio is Caroline Drury, vocals, Jesse Peters, piano and vocals, with Graeme Peters on drums. From Whitehorse, they are considered one of Yukon's greatest cultural exports. They have competed in Canada on the local, regional and national level, garnering much praise for their innovative approach to vocal jazz. Their sound is comparable to a big band in miniature - swing with a compact instrumentation. Their repertoire consists of original songs and original arrangements of jazz standards, approaching historical jazz through a variety of influences such as hip-hop and funk. The group works collaboratively with equal input from all members. Dubbed 'Yukon Gold... a jazz gem from Whitehorse' by the Toronto Star, the Peters Drury Trio appeals to a broad audience - from seasoned jazzers to new jazz listeners, from youth to seniors. By the ages of 21 and 19, they had released two critically acclaimed recordings. Both discs were recorded by two-time Juno award winning producer, Rick Kilburn. September 1999 saw the release of their debut CD When Old Met New. The CD received rave reviews by critics and listeners both in Canada and internationally. Their second recording, BACKBEAT was released in September 2001 and features some of Canada's elite jazz musicians: Hugh Fraser, Campbell Ryga, Ross Taggart and Alan Matheson. Since the release of When Old Met New, the Trio has secured Canadian distribution with Festival Distribution Inc.; distribution in the United States; CD licensing in Hong Kong; national and international radio airplay; television, radio and print media coverage in Canada, the US and Hong Kong; showcase opportunities in Canada and the US; toured Canada and the US.

Here's what you say about
Peters Drury - Backbeat.