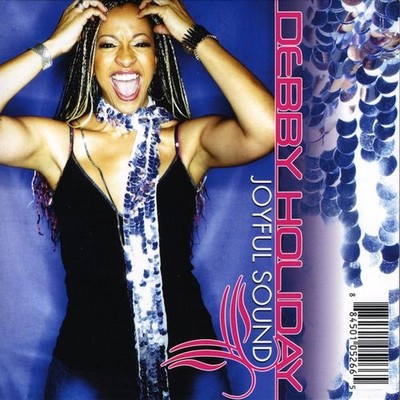 Debby Holiday's latest project, Joyful Sound (*Nebula 9 Records), resonates of 90's divas and modern sounds. Featured in this season's hit LOGO show Sordid Lives: The Series, from writer/director/producer Del Shores, Joyful Sound joins artists Olivia Newton John, Georgette Jones, Sean Wiggins and Kacey Jones on the critically-acclaimed soundtrack. Holiday releases the dance remixes of the hit with mixes by DJ Scotty K., Tracy Young, Wayne G & Porl Young, Hex Hector and Jake Benson on October 7th, 2008. Joyful Sound will be available on CD single exclusively from PerfectBeat.com. And via Digital Delivery exclusively from Masterbeat.com on October 14th, 2008. Joyful Sound (*Nebula 9 Records) will go wide in all media and markets on October 28th, 2008. Holiday broke onto the dance scene with her Billboard Top 5 Summer anthem Dive in 2004. Holiday followed the smash hit Dive with remixes of her power ballad Half A Mile Away, which shot into the Billboard Top 10, along with Debby's follow-up dance hits Bring It On and Piece Of My Love, both of which went Top 20. Last February, Holiday was the featured artist performing Surrender Me for Tony Moran's imprint, hitting another Top 20 position on the Billboard Dance chart. Her music can be heard on television with the Half A Mile Away remix in the first season of the FX series Dirt, and in NBC's hit series 'The Office' in April, 2008, plus Piece Of My Love was included on the last season of Showtime's hit The L Word. Holiday's music is heard on major market commercial and satellite radio airplay nationwide, including KBIG in Los Angeles (Clear Channel), WKTU (NYC), KNHC (Seattle), KNRG (Phoenix) and satellite radio networks Sirius and XM. Debby Holiday's other projects include a role in a national Sprint television commercial, and looping on the Golden Globe nominated Paramount Pictures musical Dreamgirls. Rock/soul diva Debby Holiday's third independent LP Half A Mile Away (*Nebula 9 Records) contains 12 tracks featuring a mix of rock, soul and pop. This LP also contains the original versions of Dive and Half A Mile Away, the remixes of which landed Holiday two Billboard Top 10 Dance hits during her first year in the dance marketplace. Both Dive and Half A Mile Away were subsequently licensed for use in the final season of the Showtime hit television program Queer As Folk. Debby Holiday experienced every aspect of the music industry early on. Her father Jimmy Holiday was a passionate and soulful artist, topping the charts with several of his own singles before going on to co-write hits such as Understanding by Ray Charles and Jackie DeShannon's Put A Little Love In Your Heart. Another standard All I Ever Need Is You, turned out to not only be a Top 10 single for Sonny and Cher - but also went on to be a huge country hit for Kenny Rogers and Dottie West. Naturally, this eclectic mix of music strongly influenced Debby's own unique and compelling sound. Debby Holiday has worked with a wide range of today's top songwriters including Jeffrey Steele, Al Anderson, Marty Fredrickson, Billy Steinberg, Erik Bazillian and Clif Magness (Avril Lavigne). Debby Holiday has shared the stage with legendary recording artists like John Waite and Rod Stewart, recently appearing on several television programs including The View, The Rosie O'Donnel Show and The David Letterman Show. During her career, Debby has toured and opened for rock superstars including Joe Walsh, Rod Stewart and Kiss. In 2003 Debby Holiday won over audiences in the juicy role of "The Blues Singer" in the L.A. production of the award-winning play, The Trials and Tribulations of a Trailer Trash Housewife, written by Del Shores. She reprised the role in Shores' production at the Zephyr Theater in April, 2006, winning an Ovation Award for 'Best Ensemble Cast'. Live club performances include appearances at WETbar (Atlanta), Alegria (NYC), One Mighty Weekend (Orlando), The Rainbow Festival (Sacramento), The Mayan (Los Angeles), Mezzanine (San Francisco), Rich's (Houston & San Diego), Splash (NYC), Factory (Los Angeles), Circus Disco (Hollywood), Coliseum (Ft. Lauderdale), Avalon (Hollywood), Steel (Ft. Lauderdale), Montage (San Diego), Here Lounge (West Hollywood), Seattle Pride, LA Pride, San Diego Pride, Sacramento Pride & South Carolina Pride.

Here's what you say about
Debby Holiday - Joyful Sound.