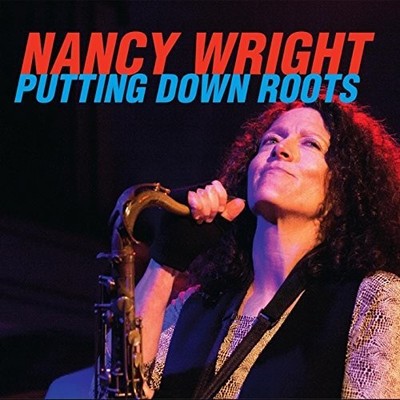 Nancy Wright carved out an illustrious place among the ranks of tough, widely informed tenor saxophonists straddling blues and jazz, with a lot of fun stops along the way long before giving us PUTTING DOWN ROOTS, her latest and boldest CD. She sums up her frame of reference, "I love listening to and playing music that is soulful, direct and intense - music that hits you below the neck - in the heart, gut, and/or hips. My musical home is in blues, R & B, and New Orleans music styles, and I also enjoy gospel and funk." Born in Dayton, Ohio, Nancy was classically trained on a variety of instruments, picked up the saxophone at 16 during her freshman year of college, was influenced by Chicago blues, and received valuable mentoring from the great guitarist-vocalist Lonnie Mack. She relocated to the San Francisco Bay Area in 1983, where she emerged in 1984 with Hot Links, recording with Katie Webster and B.B. King. She also toured with John Lee Hooker, Elvin Bishop, Commander Cody, Maria Muldaur and many others. Meanwhile, she was racking up studio credits with most of the aforementioned plus Joe Louis Walker, Mark Hummel, Mighty Mike Schermer, Ron Hacker and S.E. Willis and recently two very well received projects featuring vocalist Frank Bey, among a long list. Says Nancy, "Junior Walker and King Curtis are huge influences [along with the historical lineage from Illinois Jacquet, Gene Ammons and on up]. Johnnie Taylor and Irma Thomas are favorite vocalists. But I am also very much influenced by the players and singers I work with, and I continue to be blessed by working with so many talented musicians." 2009 saw the release of her debut all-instrumental CD MOANIN' on Chicken Coup/Summit Records, a soul jazz tour de force backed by the organ trio of producer Tony Monaco. Shortly thereafter, Nancy began singing on stage and received positive feedback. Now with PUTTING DOWN ROOTS, Nancy adds three major dimensions to her recorded artistry. We'll let her set the scene: "I wanted this CD to feature the music which most influenced me as a player. The music incorporates many roots musical styles which are also my musical roots. I decided to challenge myself by doing a full CD of original material and by adding songwriting/vocals for the first time. I chose musicians from the Frank Bey project - seasoned supportive players who have a demonstrated track record of working well together - and a studio and engineer that we were all familiar and comfortable with. [Keyboardist] Tony Lufrano put together some wonderful pre-production demos for about half the tunes, and it was at times magical watching these players develop the material for the session. This is my first time as a producer, and one of the pleasures of listening so closely was a constantly increasing appreciation for their work on this CD." The resulting CD is equally impressive and personal. The supporting music is indeed immaculate, tasty and tasteful. Nancy's vocals convey charm and more than enough skill and conviction to sell her words. The instrumentals span a wide gamut and would make up a party disc to rival those of her avowed heroes. "Boogie for JL" is dedicated to Hooker, with whom she has fond memories of touring including a Carnegie Hall showcase, with an extra "bit of my love for the music of Magic Sam." "The Big Queen" is New Orleans to it's funkified core. Per Nancy, "There is something so special about the music there, especially the rhythm sections. The title refers to the women who mask for the Mardi Gras Carnival festival." "A Serendipity" adds a touch of whimsy; "Funkin' It Up" will put the listener in a cold sweat; "Grooving Easy" is soul at it's sweetest; and "Sanctity in Blue" is what the title suggests, a slow blues-based sermon topped with a strong solo by always tasty guitarist Anthony Paule. Kid Andersen demonstrates his shared affinity for Lonnie Mack on the vocal "Well I'm Travelin'," a totally apropos homage to Nancy's early supporter with a train-beat. The rest of the vocals are spiced to varying degrees with her powerful tenor playing. "Sweet Soul Satisfaction" is an ode to romantic rapture; "Just Can't Put a Finger on It" is a funk-laced ballad of changing love; "Hush Little Darlin" is a lilting offer of comfort. Nancy's own rousing Junior Walker-laced solo graces "Lovely Pretender," about a woman's bravado. "Seems I Still Love You" is a deep ballad with gospel feeling. It takes courage, plus a whole lot of creativity and diligence, to put out a collection of music which is this personally conceived and submits so many aspects of the artist for public acceptance. There is so much more to her than the impressive resume we already knew, and here it is. Nancy need have no fear, and neither should the listener. She and the band have nailed PUTTING DOWN ROOTS in every way possible. Her challenge is our enjoyment. Dick Shurman - producer and historian.

Here's what you say about
Nancy Wright - Putting Down Roots.