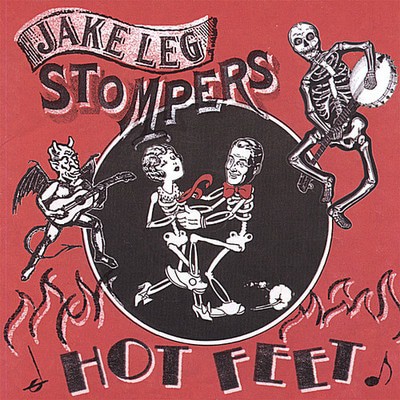 THE NIGHT HOKUM MET BILLY Pleased to make your acquaintance, children, Limber Louie's the name; that's right, the original limber leg hisself. So you want to know about the birth of Chicken-fried, Pre-war, Hokum-billy jug music? Well, you come to the right place, you know: I was there the night it all happened, back in Nineteen hundred and twenty-eight, it was. Old Gid Tanner and Riley Puckett come into town lookin' for to knock the dust and travelin' coal tar outta their throats, and sure enough, they stepped up to Vic Dante's Inferno Bar on Beale Street, you know, there 'neath the sign that read "Abandon All Despair, All Ye Who Enter Here," and when the dime store Indian workin' the door says, "Two bits," old Gid reached into Riley's nation sack for the coins, and they moseyed inside. In the back, by coal-oil lantern light, Will Shade was leadin' a ragtag Memphis jug band in a chaotic stomp through a haze of opium and the blowback of grinning vipers. The Jamaica Ginger Happy Hour was in full swing, you know, with the dwarfs and fat ladies throwin' back two-for-one Jake specials before a-shufflin' off to work the freak tents down by the river. Now, you understand I was sittin' at the far end of the bar with a bottle of Hooch, and there beside me, old Gus Cannon was passing out wolf tickets to a pimp about a sweet mama he wanted to make some time with. "Viola? Now she ain't no cheap trick, banjo man..." says that lavender-ring rascal, pushin' his fedora further down over his eyes and leanin' deep into his elbows on the bar. The band kicked into another whiskey-stooped stomp, this time lead by a one-legged guitar player, name of Fuzzy or Flurry, or somethin', while handsome Jab Jones' jug sucked talk-back bass from the low-timbered ceiling. Suddenly the floor was spittin' up sawdust, as it filled with hip-shakin' hoochie-mamas dancin' the "cock-it-on-the-wall," the "black bottom," and "ballin' the jack" with their hot feet. I seen Gid throw back a shot and then he takes his gut-string fiddle and peels a reel while Riley starts walkin' the fat strings of his flat-top, punchin' points against Jab's hollow jug. A right hypnotic chaos ensued-you might even say, erupted-with hustlers and hookers, vamps and vipers, coons and crackers all taking to the dance floor, a-shaking their sugar heels. Nobody ever heard nothin' like it before! No Suh! It sure was somethin' new. Now here come old Frank Stokes and Tim Wilkins out of the gamblin' room out back to get in on the action with Son Sims on his cigar-box fiddle. Talk about your string band bastards however you please, but you ain't never heard the likes when all these boys got to cookin' with their medicine show numbers and coon songs, and them old plantation fiddle tunes, yes indeed, and meanwhile, the canned heat got passed around and around, a-fueling the whole frenzy. And then the gin-heads and jazz babies from Jim Canaan's and Church's Hall caught that new sound on the wind, you know, and they hustled over so fast you could shoot dice off their coattails! By now the saints and sinners were all a-yoked together in their common destiny at the seventh station-where the fires burn brighter, deeper, and meaner than a butcher's heart: Ain't no turnin' back now! You know you can't un-ring a bell! That's when Ms. Lucile stepped up in a dress so tight you could read her mind right through it, and she sang till she sweat; all about how her long tall daddy, you know, gonna take her to hell, and put some sugar in her bowl, you know. Oh, I swear she done saved all our sorry souls with that miscegynated syncopation! North Georgia met North Delta that night, and they flowed together like untamable rivers surgin' into the old Big Muddy, to flood our musical bottomlands with fresh alluvial soul. See, 'cause down here, it ain't no sin! You got to shake it and break it with all you got 'til the undertaker lays you into that wooden kimono. You just sip that Jake, chuck a little Hell, and crawl all the way to Georgia on that Mobile Line, cause lawd knows, it's the only road for a troubled mind. I ought to know! Yessur! So that's how it all happened, way back in '28. These here Jake Leg Stompers are the bastard grandchildren of that night's shotgun marriage of blues and hillbilly music. They still playin' that old Chicken-fried Pre-War Hokum-billy Jug music for nickels and dimes, you know. Yessur. I'm glad you children come here to see me tonight, but I got to be movin' along now. Need to find me a Sugar Mama come fix my bed - this white lightnin's done gone to my head. THE JAKE LEG STOMPERS ARE: -Brandon Armstrong (string bass, trombone, tuba, jug, balaphone, mandolin, banjo, percussion, vocals); -Ron Bombardi (fiddle, guitars, mandolin, tinwhistles, accordian, jews harp, percussion, autoharp, vocals); -Bill Steber (vocals, guitars, banjo, ukelele, banjo-uke, harmonica, saw, mandolin, dujo, diddly-bow, autoharp); -Charlee Tidrick (vocals, fiddle, mandolin, washboard, percussion) -Sam Rorex (drums, percussion, guitar) Based in Murfreesboro, Tennessee, the Jake Leg Stompers offer tangy tastes of chicken-fried, pre-war, hokum-billy jug music to gourmet audiences throughout the greater Nashville, Middle Tennessee region. Acclaimed for their spirited, eclectic, and wildly unpredictable street performances, the Stompers are equally at home playing for dozens in night clubs or hundreds on festival stages.

Here's what you say about
Jake Leg Stompers - Hot Feet.