Blue Sage - What Makes the World Go Round 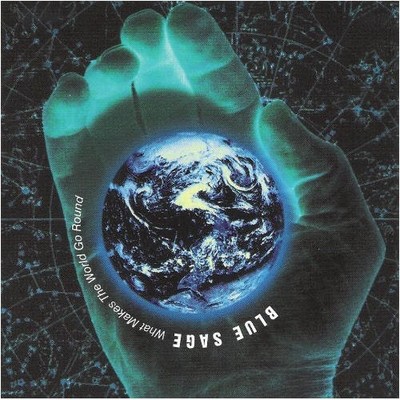 Continuing from the first CD, 'lifeforce:' After we decided not to release it, we just kept recording and filing them away. Then in the year 2000,I wrote a song called, 'the man who would be king' about the presidential election. It was a song about the whole recount process. At that time, I also had a really bad week and I wrote a song called, 'I've got the fire,' which is about no matter how hard the world pounds on you there's still something inside each one of us that can pull us through. But when the election ended in December, I decided not to release them. Then came 9/11, 2002 which changed everything. I really had to start questioning where we as a society were going. Then one day, I just started thinking how hard it must be for the firemen to do their job since they lost so many of there comrades and I felt like writing a tribute song to them and this just came out one day. I named it, 'the firemen,' and after letting a firemen listen to it and giving me such a great response, which was really humbling, I was really inspired. That same week, thinking about how much heroism the people on flight 93 had, the song came out from the standpoint of one of the passengers singing it. Of course, it's called, 'flight 93.' The last three songs I added to the CD all have the same kind of theme running through each one of them. The title track of the CD, which is 'what makes the world go round,' asks the question, 'what will happen to us and the world with what's going on?' 'Rock in the city tonight' is a real think song about how everybody just would like to do their own thing without any hassles. The last song is really bringing me back to where I started from; Bob Dylan, whom I first listened to and whose songs I played. This song is a tribute to Bobby called, 'ode to bob dylan,' which any Bob Dylan fan will get a kick out of. I hope everyone will enjoy it as much as we have had making it. If you would like to e-mail you can. Thank you.

Here's what you say about
Blue Sage - What Makes the World Go Round.