Warren Billings - Way of the Lord 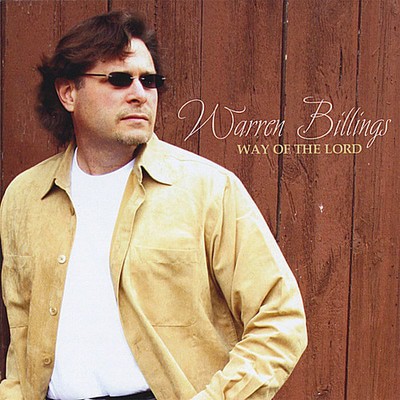 Warren Billings is a new and exciting, up and coming Christian Music artist and songwriter, whose musical roots are grounded in multiple genres from Gospel, Traditional and Contemporary Christian, Country and Rock, to being a classically trained vocalist. Warren was trained by well known composers, earned degrees in music and has extensive live performance experience. Also, Warren has worked with music industry professionals, from Nashville Grammy award winners to Gold and Platinum selling achievers in Los Angeles. He is excited to present to you, his album titled 'Way Of The Lord', containing fourteen original, inspirational songs. Much of his popular Christian music can easily be crossed over into different genres which gives the listener variety, keeping the music fresh and interesting from song to song, but still with the pleasurably distinctive sound of Warren Billings. The entire album was composed, performed and produced by Warren. The debut title track 'Way Of The Lord', is a high energy praise song that generates excitement in every listener. The ballad 'Song For Mom', is a sure hit for everyone on the Mother's Day holiday. The album is loaded with exciting popular sounds and extremely moving ballads. Warren's music offers hope, power, strength, rejoicing and love in the Lord for every believer. However, the niche in Warren's music is that it is simple and to the point, delivering a clear message about life relating to everyone, which draws the attention of the unbeliever as well! The Contemporary Christian, Country/Rock/Bluesy/Pop style of Warren Billings will satisfy most anyone, of any age. When he was a child, Warren's grandmother taught him to play a little toy piano and she told him Bible stories. In the sixth grade, he wanted to join the school marching band. When his mother took him to choose and buy an instrument, he thought he would like to learn the trumpet which was several hundred dollars. Next to the horn was a drum practice pad and sticks that were twenty dollars. So his mother said, 'Well son, it looks like you are going to be a drummer'! Warren went on to play the drums, continued with piano training and later, learned the guitar. After high school, he joined a local band. At the first band practice while choosing the music, the question was asked,'Who is going to do the lead singing in this band'? Everyone stared at each other a while, waiting for a volunteer, until it was suggested that Warren should do it because, if the audience did'nt like the band and started to throw things at the lead singer, Warren could at least find some protection hiding behind the drums! Regardless of the many experinces, it was Warren's grandmother who was the huge influence that put inspiration and desire in him to pursue music. He was baptised in his church and studied the Bible, holding close to the values it taught him, and continues to apply those ways in his life and with his family. Today, Warren is promoting and performing, and is excited to be making so many new friends in the Lord through his music, and he is doing this work all for the Glory of God! Warren wants to express his deepest appreciation and thanks for everyone's prayers and support towards this ministry, and he prays all will receive blessings from this music. Thank you and God bless!

Here's what you say about
Warren Billings - Way of the Lord.