Happy Ending - Turn It on 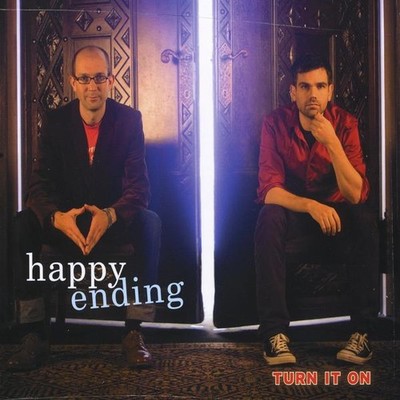 Happy Ending is Carl Bishop and Michael Goodenow. Having grown up in the Western NY escarpment cities of Buffalo and Rochester respectively, they met later in life at school. Carl, the teacher had Michael as a student in class. Carl, also the lyricist and singer was looking for a musical collaborator and found one in composer and guitarist Michael. They both decided that the world needed more melodic pop rock songs about human weakness, animal strength and love saving the day. Happy Ending draws it's inspiration from the free association of Wilco and oblique worldviews of Leonard Cohen and Bob Dylan. Their music is epic, sweeping, and Americana-tinged, while combining elements that are delicate, yet powerful. The songwriting of Carl and Michael is heavily influenced by the undeniable pop of the 80's, from hit makers as diverse as R.E.M, the Cure and U2 to Joe Jackson, Duran Duran, and A-ha. Carl and Michael have set out to write melodic and memorable songs that tell stories reflecting true life, love, pain, and triumph. After recording a few demos that reflected their singer-songwriter minds and rock band hearts, Happy Ending caught the ears and interest of award winning NYC Producer Jimi Zhivago and Grammy winning engineer Brian Thorn and began recording at The Magic Shop in April of 2009. Carl and Michael kept the project personal by playing most of the tracks themselves, while Zhivago filled in on additional instruments. The result is their debut album "Turn it On," set to be released March 5th 2010. Happy Ending's sound is reminiscent of indie-rock bands such as Death Cab For Cutie, The Shins, Wilco, Spoon, The Swell Season, Phoenix, Ryan Adams, and Ben Kweller, among others.

Here's what you say about
Happy Ending - Turn It on.