Jeanette Williams - Thank You for Caring 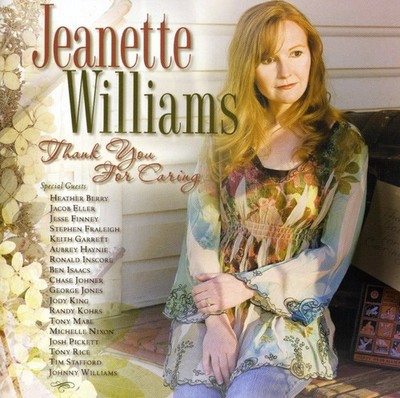 Jeanette Williams is Back with Brand New CD "Thank You for Caring" Now Released Nashville, TN: Blue Circle Records is proud to announce the brand new album, "Thank You For Caring" by award-winning bluegrass artist, Jeanette Williams is now released. \'If an artist is playing traditional bluegrass or modern contemporary bluegrass it is their ability to combine the two styles perfectly to create an album that older and newer fans alike will love that is going to gain them attention from the industry. Jeanette Williams has just accomplished this feat with her third solo project Thank You For Caring. There is no denying talent when you hear it and this album is full of talent in every aspect of the word," said Today's Country Magazine this week. This 14- track CD includes songs by bluegrass music's most talented songwriters including: Tim Stafford (Blue Highway), Brandon Rickman (Lonesome River Band), Paul Williams, Laurie Lewis, Shannon Slaughter, Marcie Horne, Tom T. and Dixie Hall and Jeanette Williams. Dixie and Tom T. Hall wrote the title track, "Thank You For Caring," a duet with Jeanette and the legendary George Jones. The song was inspired by a young girl whom songwriter Dixie Hall met during a mission to gather relief items for victims of the Hurricane Katrina disaster. The child had unselfishly donated her personal hope chest with words of appreciation \'Thank you for caring." Ben Isaacs produced the song and also provided harmony vocals. Williams is donating a portion of the album sales to the American Red Cross for disaster relief. Jeanette's original song and the brand new single, "Enough of You," garnered the Chris Austin Songwriting Contest award in the bluegrass division at Merlefest in 2007. \'It\'s always a pleasure to hear new music from Jeanette Williams, but this latest batch is outstanding. Whether it\'s traditional-sounding or contemporary, she\'s got a great ear for a great song and the voice to really make each one come alive," said Jon Weisberger. Thank You For Caring includes guests: George Jones, Tony Rice, Tim Stafford, Johnny Williams, Michelle Nixon, Heather Berry, Jacob Eller, Jesse Finney, Stephen Fraleigh, Keith Garrett, Aubrey Haynie, Ronald Inscore, Ben Isaacs, Chase Johner, Jody King, Randy Kohrs, Tony Mabe and Josh Pickett. Jeanette has become one of the most respected female vocalists in bluegrass music. She has recorded 11 projects during her career, including the critically acclaimed chart album, Cherry Blossoms In The Springtime. She was also part of the 2006 IBMA Recorded Event of the Year album, Back to the Well by the Daughters of Bluegrass. "How's It Feel," another Hall composition and Jeanette's featured cut on the same album, also graced the chart tops for many months. In 2008, again a forerunner of the pack, Jeanette shines with "Keep On Walking" on the new Blue Circle Records, Daughters of Bluegrass extravaganza, Bluegrass Bouquet. Jeanette Williams currently tours with The Jeanette Williams Band.

Here's what you say about
Jeanette Williams - Thank You for Caring.