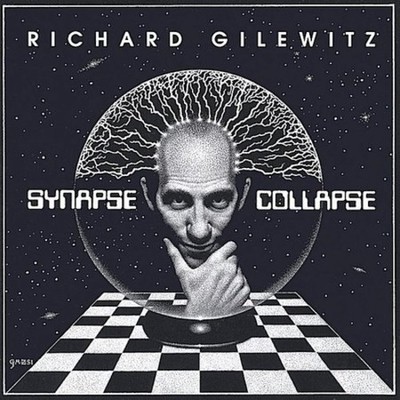 Richard Gilewitz, Synapse Collapse (Gillazilla, 1997) Richard Gilewitz's Synapse Collapse is an acoustic guitar masterpiece. Whether on 6 or 12 strings, Richard Gilewitz shows great talent and innovativeness, as well as undeniable personality through his fingerstyle guitar playing. The album is full of wonderful and creative tunes that really seem to have something to say (despite the lack of vocals). They range in style from folk to blues to Latin. The first song, 'Embryonic Journey,' sounds like a pleasant travel tune you would play in your car, though thinking of it as 'embryonic' certainly sheds a different light on the bouncy, rolling guitar and piano sounds. But that's the type of thing to expect from this album; tunes sometimes sound simple because of the sheer ease Gilewitz fingers his way through complex series of notes, reflecting how the tune's easy-going melodies mask the elusive subject of the song. 'Dirt to Dust' is a somewhat darker, mellower sounding number, with driving Latin percussion. I especially enjoy the part in the track (at the 3 1/2-minute mark) where it sounds like he tears all the strings off his guitar -- it really grabs your attention. 'Dance' is an innocent-sounding tune that truly shows off Gilewitz's prowess at establishing different moods, even during a single track. 'Steve Talbot on the Keddie Wye' has very much the same feeling as 'Embryonic Journey.' Here, I must admit that it is not the guitar, but the piano (played by David Webb) that is my favorite part of the arrangement. That's allowed, isn't it? And I must mention the twangy slide guitar tune 'The Sailor's Grave on the Prairie' simply because of the wonderfully clever title (written by Leo Kottke, the revered guitar master). In the mood for blues? Gilewitz includes that musical style as well, most notably in 'St. Louis Blues' (but you could have figured that one out for yourself, couldn't you?) Or are you craving more folk-oriented music? You only need go as far as the next track, 'Gove's Tune,' though Gilewitz adds a noticeable flamboyance to it with well-placed echoing effects. In short, Gilewitz's style is hard to put a finger on; he seems quite adept at every form of acoustic guitar playing. Anyone who is a fan of acoustic guitar would benefit greatly by acquiring this album a.s.a.p. Not only is he an extremely talented guitar player, he demonstrates how to work mood into the songs with innovative flair. [ by Patrick Derksen ] Rambles: 28 July 2001.

Here's what you say about
Richard Gilewitz - Synapse Collapse.