Mary Lambert - Swinging on a Star 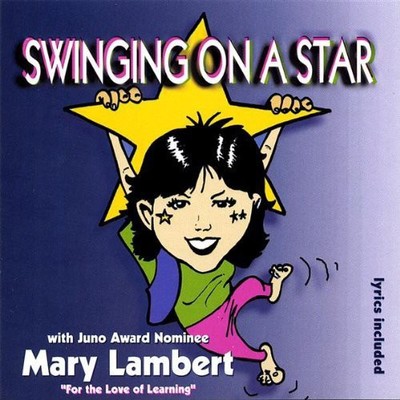 Juno award nominee, iParenting Award Winner (USA) and Parents' Choice Award (USA) Winner, Mary Lambert, is a family singer/songwriter/performer who currently resides in Kingston Ontario. Mary is a dazzling and dynamic addition to the Canadian children's music scene. Her wonderful voice and colourful performances are filled with infectious music, sheer energy and tons of audience participation. In the past ten years, Mary has toured and performed over 2000 shows at schools, music festivals and family focused events throughout Canada. We are pleased to announce that her new CDs, 'Summer Fun' and 'A 'Mary' Christmas' are hot off the presses. Her children's performance career began in Muskoka, ON, in 1993 when a good friend overheard her singing to her children at bedtime. Her career has since taken on two distinct identities. Mary has become known to thousands of children as 'Peanut Butter' from the singing duo JAM SANDWICH. They produced their first cassette, full of traditional and well-known children's songs, entitled 'Singin' Along' in May of 1997. Their 2nd collaborative project, 'Play On' was released in June of 1999, and was nominated for a Juno Award for 'Best Children's Album'. 'Full O' Baloney', their third and most recent project, is full of songs about their wacky 'Sandwich' family. Throughout her years as a singer/performer, Mary has thoroughly enjoyed bringing the joy of music and creativity to kids of all ages. She is now taking her experience as a performer and mother of four, to write songs for families that are fun, uplifting, humorous and interactive. Mary's first solo recording project, 'Family Fun', is filled with entirely original works and has met with great success with children and parents everywhere. Her second project 'Swinging On a Star' is a learning-based recording where kids learn their provinces, territories and capitals, the difference between their left and right, the history of the RCMP in Canada, and much more. 'Sing Out Fire Safety' is filled with fantastic original songs to help kids have fun while learning about Fire Safety through music. Mary tours to schools and concert halls across Canada with her Fire Safety Performance, and has the support and commendation of the Fire Marshal of Ontario and Fire Prevention Canada. This has been translated and recorded into French with 'Chantons La Prevention' receiving a Summer 2002 Parents' Choice Award from the U.S.A. The Live Concert Music Video with this theme will now allow every child in Canada to experience 'Sing Out Fire Safety'. Some of Mary's solo performances include Halifax and Dartmouth - Nova Scotia, Lethbridge, Lacombe & Edmonton -Alberta, The Grand Theatre - Kingston, The Corel Centre - Ottawa, The Keystone Centre - Brandon, Manitoba, The Gravenhurst Opera House, Toronto Winterfest, Nathan Phillips Square - Toronto, 'Toonie Tuesdays' - Kitchener, The Perth Fair, Summerfest - Oakville, Mariposa - Muskoka, Deerhurst Resort, telethons, charity events and numerous schools throughout Ontario.

Here's what you say about
Mary Lambert - Swinging on a Star.