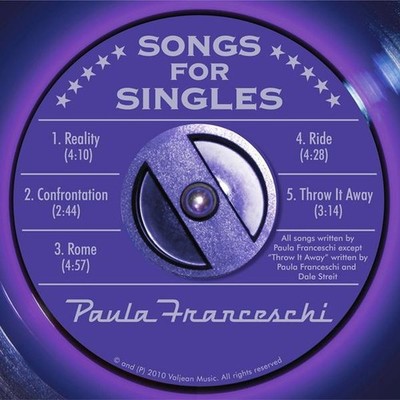 Growing up in a household where Nat King Cole jostled for air space with La Traviata, Paula Franceschi learned to appreciate all kinds of music early in life. She played flute in her school band, sang harmonies in her church choir and started playing her brother's guitar at age 12. For the singer-songwriter, that's when it all really began. After playing in folk groups, rock bands, discos and clubs in New Jersey where she grew up, she was almost prepared when the Canadian singing duo, The McGarrigle Sisters, saw her perform as a member of the band, Wood River, in the early 70's and began to manage her. But Paula had her own ideas about the kind of music she wanted to play and how she wanted to play it and sadly, they parted ways. As she traveled from San Francisco to Boston to England, she continued performing until she moved to Los Angeles with her husband Carl and fell into a career in the movie business, creating trailers for the major Hollywood studios. It wasn't until many years later, when her sons were finally grown and she had garnered much success as a film executive, that she felt she was finally free to get back to what she was born to do. Still a rocker with stories to tell and the hope to "cast a spell" with her songs, she learned ProTools and began honing the eclectic style that would ultimately comprise the songs on her first EP, Songs For Singles, produced by David Bergeaud. With clear elements of Hawaiian, Brazilian and Caribbean rhythms and hints of Roots Rock, Brill building Pop and even country, the album is a lyrical example of Franceschi's endless gift for musical variation. "I was inspired most by John Lennon," she explains, "because he wrote in whatever musical form suited the message, even if it wasn't cool at the moment." She has the ability to tell a tale with emotion, rich characters and visual imagery. That, after all, was the essence of her work as a film trailer maker. Whether she's singing about confrontation or love gone wrong, her distinctive, charismatic vocals reveal a lifetime of experience, a tender soul road-hardened by a rich, sometimes turbulent life. Missing the energy and exuberance of playing live, she put together The Paula Franceschi Band which includes her son Alexander Stensel on guitar. As the six-piece group plays gigs for audiences around Los Angeles and plans to tour, the musical focus is on blues, funk and rock 'n' roll as they play songs Franceschi wrote last week alongside those written in her wilder days when she was the age her son is now. Franceschi's dedication to music transcends her own personal interests. Her desire to learn the business side of music has led her to serve on the board of the California Copyright Conference, an organization of industry professionals helping composers protect their intellectual property. It is a bittersweet note that on a day of great promise, when Barack Obama was elected President, Paula's mother quietly passed away. But Franceschi will always remember that one of the last things her mother ever said to her was "Where's your album?" Now that it's here, there's no telling what will happen next.

Here's what you say about
Paula Franceschi - Songs for Singles.