Brother Sun - Some Part of the Truth 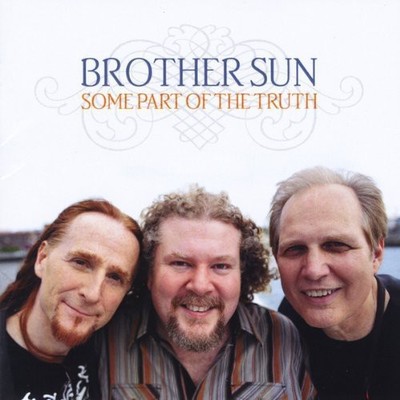 Brother Sun's debut CD announced to the world that three respected singer-songwriters - Greg Greenway, Joe Jencks, and Pat Wictor - had banded together to produce some of the most powerful male harmonies on the acoustic music scene. After two years of nationwide touring and performances marked by outstanding songwriting, ethereal harmonies, off-the-cuff humor, and standing ovations, they are releasing Some Part of the Truth - a CD that goes a large step further in revealing Brother Sun not only as singers, but as complete musicians. Some Part of the Truth is cinematic in it's sweep, each song like a short film. The CD takes us on an evocative and vivid journey through America's cities and heartlands, where unsung heroes struggle and sometimes win the daily battles of life and love. Producer Ben Wisch shaped the mood and atmosphere of each song, with Greenway, Jencks and Wictor all providing instrumental touches ranging from subtle to bold. Superlative bassist Zev Katz, percussionist Joe Bonadio, and cellist Brian Sanders fill out the sound beautifully. With even richer and more varied vocal arrangements than on their debut, Brother Sun keeps reaching higher, and their joy in singing together gives the CD it's indelible optimism. 'The moment Greg Greenway, Joe Jencks and Pat Wictor pooled their voices as Brother Sun in 2011, the folk world was enriched by their harmony, humanity, and humor. In the years since, their bond with each other and their fans has only deepened. If there's any justice (something they care deeply about), their superb sophomore release, Some Part of the Truth, should bring the warmth of Brother Sun to a whole new world hungry for the healing power of their music.' -John Platt, WFUV radio 'Brother Sun's Some Part of Truth reawakens my soul and reminds me why sharing music matters. Only a few of the thousand releases I receive grab my ears while gripping my heart. Such is Some Part of Truth. More polished than Brother Sun's initial effort, Some Part of Truth blends expressively riveting male harmonies with precise, equally sensitive guitar and keyboard talent into three personal journeys from deep within. Yet the whole remains greater than any one path, and these distinct passages, in texture and topic, ultimately converge in the harmonies compelling you to travel Some Part of Truth to it's ultimate aural and spiritual harmony.' -Rich Warren, WFMT radio 'Gorgeous! Some Part of Truth stacks harmonies rich as chocolate three layer cake with sweet butter frosting. Calorie free, this record is aiming for your heart. It arrives at your ticker's doorstep with authentic folk and blues brought out by producer Ben Wisch's knack for subtlety. Greg Greenway, Joe Jencks and Pat Wictor have created a true powerhouse collaboration in song, voice and justice. But the songs, the way each word is indeed sung, and the arrangements make this record a needle shining brightly in a haystack." -Mary Sue Twohy, Program Director, Sirius XM's 'The Village'

Here's what you say about
Brother Sun - Some Part of the Truth.