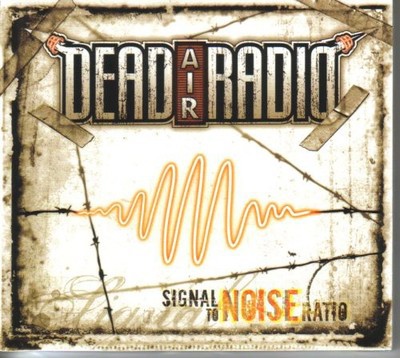 Dead Air Radio serves up a masterful blend of progressive rock and metal on their latest CD, "Signal to Noise Ratio", with soaring melodies, complex guitar performances and crushing riffs. Hailing from Nashville, TN, this power trio is turning heads with their high energy rock, which fuses elements from progressive mainstays Rush and Yes with the heavier, contemporary styling of such modern acts as Dream Theater and Tool. Bill Givens, Dennis Thompson, and David Charlesworth draw upon a more diverse palette of rock ranging from Seal, Sting, and Nickel Creek to more aggressive fare such as Slayer, Metallica and Mudvayne. The end result is a dynamic, fresh perspective on the genre. 'Signal To Noise Ratio' begins with an explosion of staccato punches that herald the passion and intensity that permeates it's eight tracks. The opening song "Unbalanced" is a progressive rock tour de force taking the listener through a plethora of sonic textures that truly showcases the band's influences, yet sets them in a class to their own. With styles ranging from metal to flamenco, this piece sets the stage for the rest of the album. Following the lush repose and crashing ocean waves ending 'Unbalanced', 'Unified' is ushered in offering it's delicate guitar and vocal combination before plunging headfirst into heavy rock groove. Radio favorite 'Immaculate Rhapsody' punches listeners in the face with a heaviness matched only by it's lyrics, which challenge the music industry's current stranglehold on artistic freedom with stabbing lines such as "disastrous the consequence hereafter, of formulaic mediocrity". The song has a pulsing rhythm that breathes life into the declaration 'we're not going to surrender creative freedom and were going make music on our own terms.' 'It's always been of utmost importance to us to not only write great songs, but to have the freedom to take it where we think it should go,' says Bill. Offering a departure from the mayhem, 'Everchanging World' features Latin-inspired congas and shakers accompanying acoustic guitars. As one might guess, the album closes out the way it comes in...with a bang. 'Liberation,' a full-tilt rocker from start to finish, features a number of tasty riffs and cascading passages to make any fan of the progressive or instrumental music cheer. With 'Signal To Noise Ratio', Dead Air Radio is positioned to take their music above and beyond. With regular airplay on local rock station 102.9's 'The Local Buzz', a three hour broadcast showcasing the best local talent, the band is causing quite a stir and is garnering many requests for their music. In fact, the band was named the #2 most requested local band at 102.9, sandwiched between major recording acts Paramore and Framing Hanley, and were also nominated for 4 Local Buzz Awards: Song of the Year (Immaculate Rhapsody), Best Metal Band, Best Guitarists, and Best Percussion. Additionally, the band has recently been the opening act for such heavy hitting national touring bands as Five Finger Death Punch and Black Stone Cherry. Dead Air Radio is also attracting attention outside Nashville as well. The guitar team of Givens and Thompson are reviewed favorably in the October 2007 issue of Guitar Player magazine by Michael Molenda. In his column, 'Myspace Hordes', which focuses on do-it-yourself bands on MySpace.com he writes, 'DAR's guitarists are crafty, inventive, and powerful guitar players. From the intro's noise spurts, through at least 5,786 changes of mood, their facility with diverse rhythms, tones, melodies, and riffs is truly awe inspiring...' In his review of 'Signal To Noise Ratio', Ken Golden, Director of Operations for international progressive label The Laser's Edge Group, states, 'Dead Air Radio is a band that has successfully created an album with plenty of crossover appeal for fans of progressive rock and metal. Take chops-from-hell, add well developed songwriting, great production and you have a winner every time. Highly recommended.' The band is also reaching international airwaves with huge interest swelling in Germany. Currently the band is playing out in support of 'Signal To Noise Ratio', and they continue to write and record new material while seeking management and label interest. The present lineup of the band began to take shape in 1999, when lead vocalist and guitarist, Bill Givens, set out to find other like-minded musicians with a taste for 'something different.' First to join ranks was Dennis Thompson, guitarist, and together they formed a creative bond that extended beyond either one's expectations. In April 2002 the band celebrated the release of it's first recording 'Strange Frequencies', a self-produced six track EP which consisted primarily of material written by Givens and former partner Jeff Story. The album was well received and put them on the map as local progressive champions. Fast-forward to January 2005 when drummer David Charlesworth joined the band and recording commenced on the band's current release. Following in the do-it-yourself tradition of their first album, their sophomore release "Signal to Noise Ratio" marks a turning point in the band's sound. This time around Givens and Thompson take the reigns as producers and primary writers. Their writing chemistry fuels the band's sound and delivers a robust palette of fresh ideas and influences. The three members of Dead Air Radio are talented musicians who thrive on pushing themselves to write good songs while still challenging mainstream musical conventions. Individually they draw from a number of influences, and the resulting strength of these influences is a mix of dynamic content, one moment quiet like the calm before a storm, the next a thundering wall of chords and vocal harmonies. Their music reflects their true love of music for it's own sake, as demonstrated with occasional mind-numbing passages, while utilizing driving beats and strong melody to solidify and weave it all together into a rich tapestry of heavy rock. Music lovers are always seeking something fresh and new, and Dead Air Radio is here to deliver with their brand of intricate, intense, pulse-pounding rock.

Here's what you say about
Dead Air Radio - Signal to Noise Ratio.