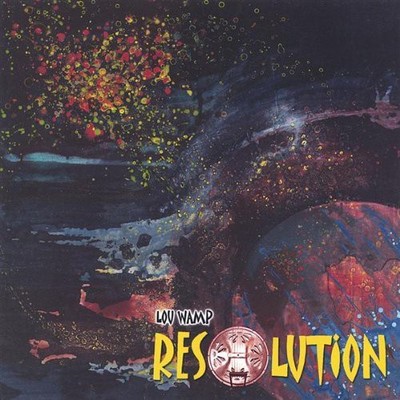 After knowing just a few things about Lou Wamp, there might be an irresistible tendency to begin tossing out labels: 'Driven', 'Renaissance Man', 'Multi-talented', 'Perplexing', or, perhaps if he himself were doing the labeling, just 'Perplexed'. Easy enough to understand, given he's at once a 20+-year veteran of the music business and a registered architect with a successful practice, impressively talented artist and painter, amateur archaeologist, and father to six kids. Not your average guy trying to pitch tunes in Nashville or make it big as a sideman or solo artist, yet, in many ways, nothing would make him happier. Many threads make up the complex tapestry of Lou Wamp, but the one that gives it the most color, the one that if you pulled it out the whole thing would come unraveled, is music. Born in Ft. Benning, GA in the summer of 1956, Lou first heard music and became influenced by it like we all do, in our parents' and grandparents' homes. From Elvis to Travis on his grandad's guitar, from Bach on the piano and cello to the Beatles on the stereo, he just wanted to play. Being left-handed, his father kept turning the ukulele around until he got it 'right'. After formal lessons (classical and theory) in piano, he picked up guitar at 13 and played in his high school jazz band. In college, he broke his wrist and couldn't play guitar. It would be a momentous accident, for after listening to Josh Graves and having his wrist in a cast, he knew 'I can do that'. He picked up a cheap resonator guitar and the rest, as they say, is history. He played senior citizen dances while caring for his grandfather in 1978 and became increasingly enamored of bluegrass music. He frequented Nashville and met Gene Wooten, who became a great friend and mentor. He played on 'Sidemen' nights at the Station Inn and by now was in a band called Hiwassee Ridge, who had a song on the charts and were performing at the 1982 World's Fair in Knoxville. He might have been just on the verge. There weren't many dobro players then. Who knows? After college, with an internship in his dad's architecture practice and passing state board exams to become a registered architect, a different path emerged - for a while. Music, however, never left his mind and heart, and he continued to write, record, and perform semi-professionally. In the summer of 1994, he decided to give 'the road' another try and toured with James Monroe and the Midnight Ramblers while also playing with local bands The Dismembered Tennesseans, Cowjazz, In Cahoots, The Cumberland Trio, and others while doing sessions, writing and recording national TV and radio spots, and penning over 40 tunes. In 2002, he joined Blue Moon Rising for an extremely successful year culminating with an IBMA showcase and many new fans of his tastefully articulate dobro playing and superb songwriting. He's now released his debut resophonic guitar project, 'ResOlution' produced by Butch Baldassari and featuring 9 original instrumental tunes (and 2 great covers) with guest artists Jim Hurst, Byron House, Andy Leftwich, Justin Moses and Tom Roady. It's been a labor of love and all involved believe strongly in the talents of a fine reso player who, with this project, will prove he can stand with the giants of the industry.

Here's what you say about
Lou Wamp - Resolution.