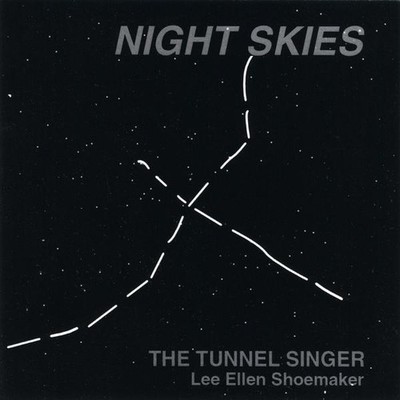 Lee Ellen Shoemaker is The Tunnel Singer, a San Francisco-based performance artist and vocalist. Born in Kokomo, Indiana in 1936, singing in spaces with long natural reverberation has been a passion since childhood. Shoemaker's mother and father taught her to harmonize with them. She enjoyed playing the family piano, but resisted learning to read music and practice scales, preferring to improvise. She remembers listening to music on the floor-model Philco radio, but favored tuning in unusual sounds between stations on short-wave bands. Her mother says that as a toddler she harmonized with the drone of the vacuum cleaner. Shoemaker studied painting, drawing and video at University of California, Davis, graduating in 1985. She often describes her music as painting with sound. Accepted for graduate studies at San Francisco State University's Center for Experimental Interdisciplinary Art she studied Performance and Life Art. She took extensive cinema and script writing courses prior to transferring to the Instructional Technology Department where she earned a masters degree in multimedia development. Shoemaker improvised with a saxophone player she met in a Golden Gate Park tunnel in 1992. He convinced her to sing with him at Cafe International in San Francisco. After a few cafe appearances with the saxophonist, she decided to try a solo performance with a Tibetan singing bowl. The audience was entranced. Requests for recordings encouraged her to record and produce CDs. Stephen Hill (Hearts of Space) referred her to an engineer with the expertise and equipment to record live performances in tunnels. Her debut album, Inner Runes (1995) is recorded live in the exquisite acoustics of the Exploratorim's "Sound Column" located inside a support column of San Francisco's Palace of Fine Arts rotunda. Her second album, Ravens in Moonlight (1997) was recorded live in Construction 129 at the Marin Headlands near the Golden Gate Bridge. It includes didgeridoo and percussion. In the fog-muffled World War II artillery tunnel, ravens can be heard in the background. Peter Thelen of Exposé Magazine describes Ravens in Moonlight as, "... somewhere between Dead Can Dance and Transmission." She traveled to Port Townsend, Washington to record her third album. Water Birth (1999) was recorded live in the "Cistern Chapel,' a vast underground concrete cistern. In it's 45-seconds long reverberation her voice creates a soundscape for an undersea voyage, evoking deep peace. Ben Kettlewell comments in Alternate Music Press, 'The compositions on Water Birth evolve like a wordless mantra, suggest-ing an underwater environment of sea creatures, slow undulation of underwater plants and inner space. Echoing voices cascade against each harmonic overtone to produce a giant modulating chord." Returning to Port Townsend, she completed her fourth album, Night Skies (2000). Recorded in a U-shaped mortar magazine the music is inspired by alchemical symbols describing the progress of the soul's journey from Earth through the heavens. Omni-directional reverberations from the unusual shape of the tunnel intensify the otherworldly feeling tone of this CD. In 1997, Shoemaker developed a neurological condition, Spasmodic Dys-phonia, and in 2000 lost her ability to sing. In 2005, Shoemaker learned of a new treatment for her voice-a unique way of injecting the affected muscles with Botox. This treatment does not cure the disorder, but allows her to sing for several weeks before it wears off and must be repeated. The Tunnel Singer has performed live coast to coast, appeared on ABC, CBS, Fox, NBC and the Hallmark Channel television and been heard on Hearts of Space, Musical Starstreams, National Public Radio, Canadian Public Radio and Netherlands Public Radio. Her independently produced and distributed music is played on inter-national radio, Podcasts and Internet radio.

Here's what you say about
Lee Ellen Shoemaker - Night Skies.