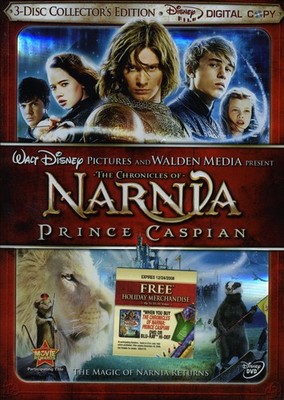 Based on the second novel in C.S. Lewis's beloved CHRONICLES OF NARNIA series, PRINCE CASPIAN finds the four Pevensie children-Peter (William Moseley), Susan (Anna Popplewell), Edmund (Skandar Keynes), and Lucy (Georgie Henley)-once again whisked away from WWII-era England into the realm of Narnia, where the siblings once ruled as royalty. However, the Pevensies soon discover that 1,300 years have passed since they left, and the world is now controlled by the Telmarines, humans who long ago banished the magical creatures of Narnia to the wilderness. When the heir to the Telmarine throne, Caspian (Ben Barnes), survives an assassination attempt plotted by his scheming uncle, Miraz (Sergio Castellitto), the noble youth stumbles across Narnia's exiled enchanted population, and decides to lead them in an uprising, aided by Peter, Susan, Edmund, and Lucy. Director Andrew Adamson 3-Disc Keep Case Anamorphic Widescreen - 2.40 Audio: Dolby Digital 5.1 Surround English Dolby Digital - French, Spanish Subtitles - French, Spanish Optional Running Time 149 Minutes.

Here's what you say about
Chronicles of Narnia: Prince Caspian.