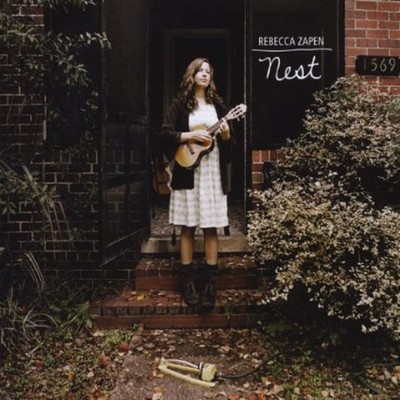 Barely out of the starting gate, Rebecca Zapen's brand-new release, Nest, was awarded Florida Album of the Year 2011 (Florida Times-Union). The album's delicate, cinematic, lush new folk forays into Americana, bossa nova, and pop. In essence, Zapen made Nest while she was building a nest of her own, with husband and recording engineer Jeremy Douglass, who also plays keyboards and melodica on the new album. The two met when Jeremy (from St. Petersburg) was searching for a string player for a friend's recording project and found classically-trained violinist Rebecca (in Jacksonville). After corresponding for a while, a chance gig allowed the two to meet and it was love at first sight. It was bashert, fate. In a dizzy, giddy whirlwind, Rebecca moved to St. Pete where they soon married and started a family. The recording for Nest began when Rebecca was 6 months pregnant, during which time they laid down all the rhythm tracks before baby Joel came into the world. They took a break from the recording as they adjusted to being new parents and getting back into the swing of gigging and such. After 13 months away from the recording they dedicated themselves to finishing it, burning the midnight oil (and 1 and 2am oil), and had it mastered when Joel was 20 months old. Twelve of the thirteen tracks on Nest are originals, with one cover, a bossa nova version of Robert Palmer's 'Addicted to Love'. Singer and multi-instrumentalist Zapen plays violin, guitar, ukulele, and cavaquiño on the album, which hops genres from the finger-picked folk and lush vocal harmonies and strings of 'Peace', to the sultry bossa nova rhythms of 'Ledge' and 'Addicted to Love', to the stark Appalachian twang of 'Colorado', in which Zapen delivers one of her most powerful songs with the simplest arrangement of voice and violin. Ukulele and it's South American cousin the cavaquiño make an appearance on 'Tiny and Strong' and 'Beautiful Love Songs Without the Love', respectively. Rebecca forays into pop with her feel-good 'I'm Gonna Make So Many Things For You', and features autobiographical songs 'Jacaranda', '888', 'Lakewood', and 'Grandfather's Song'. The cinematic 'You Did Me Wrong' moves seamlessly from folk to string-driven pop to spaghetti western to jazz waltz. The songs' instrumentations vary, including support from violin, double bass, drums, clarinet, trumpet, trombone, and keyboards. And there is Zapen's beautiful voice, lilting and crooning, with purity of tone and minimal use of vibrato, although she reveals a rarely-heard facet of her voice, belting key phrases in 'Colorado'. Said one listener, 'your voice made my heart break into a million pieces'. Accolades and Awards: Nest: Florida Album of the Year 2011 (Florida Times-Union) 'While some musicians spend a lifetime avoiding responsibilities and domestic duties as if they were sunlight or sobriety, classically trained violinist, singer-songwriter and ukulele-shredder Rebecca Zapen has taken the art of settling down to new heights with her latest album, the aptly titled 'Nest'' (Folio Weekly) 'Nothing adequately prepares for the way in which her deeply personal album instantaneously envelops and never loses it's grip.... The title song and others bring to mind no less than early solo McCartney and Brian Wilson's SMiLE.... One of those near-perfect hidden gems...' -- RELIX (on album Japanese Bathhouse) * Best Cabaret Album & Best Cabaret Song - JPF Awards 2009 * Jacksonville's Musician of the Year 2008 (jacksonville.com) * Musical guest on NPR Michael Feldman's WHAD'YA KNOW? 2/2/08 * Featured on national promotion for Crocs shoes Spring/Summer 2008 * 2nd Place - Bushman World Ukulele Video Contest 2008 * Finalist - DiscMakers' Independent Music World Series 2007 * Top 12 DIY Albums - Performing Songwriter Magazine * Festival performances have include: Florida Folk Fest, Gamblefest, Jacksonville Jazz Festival, GramFest, DjangoFest NorthWest * Venues have included: The Bitter End (NYC), Genghis Cohen (L.A.), and Les Temps Modernes (Switzerland)

Here's what you say about
Rebecca Zapen - Nest.