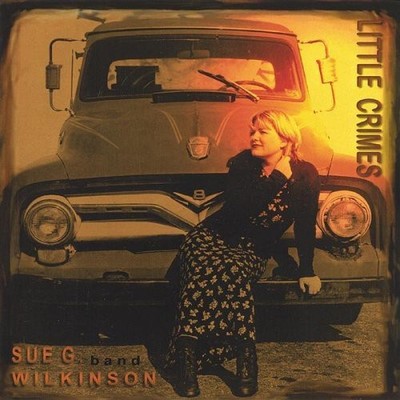 This independent release 'Little Crimes' represents not one, but two projects by Sue G. Wilkinson. Inside you will find ambiant pop selections are well as piano based rockin'R&B. Get ready for some music that you won't be able to leave alone folks! Read on for more deatails: The unforgettable ambient sounds of SUE WILKINSON are trance-like and highly melodic, powered by breathtaking vocals that can only be categorized as one of a kind. 'Blessed with an amazing vocal range, she has not only the power to blow down a brick house, but an astounding sense of versatility with the emotional capacity of PATTI GRIFFIN, FIONA APPLE and TORI AMOS combined.' Her new title track 'Sympatico', is at once piercing yet mellow, languid yet pulse pounding, and undoubtedly one of the most gorgeous cerebral pieces I've ever heard.' says ezine MuzikMan. Sue is the voice and co-composer behind a musical collaboration with film scorer, bassist, and recording artist, PATRICK O'HEARN. A Grammy award winner, his electronic-based instrumental music is considered to be the foundation behind the ambient musical movement, not to mention the modern synthesized orchestral sound heard in today's film scores. Here's what the critics have to say about her Rockin' R$B stuff: GO GIRLS MUSIC REVIEW describes Sue's piano based music: ' She hits rapid-fire intros, takes improvised solos, plays like mad, and it's a pleasure, an inspiration, and a 'how does she do that?' to listen to. Sue's adventourous spirit blended with a diverse, eclectic musical background has also given birth to a Rhythm and Blue's band that has toured extensively. Well known in the UK, Davy MacFarlance writer for BLUES MATERS, INTERNATIONAL BLUES, AND REAL RNB, the UK's most read blues magazine, says Ana Popovic 'could be fighting for space in a crowded field given the amount of blues women around: Bonnie Raitt, Susan Tedesch and the most EXCELLENT SUE G. WILKINSON.' No reason to wonder why Miss Wilkinson has opened up for bands like PEARL JAM, RED HOT CHILIPEPPERS, Ministry, Lush, THE INDIGO GIRLS, COLONEL BRUCE HAMPTON and the Aquarium Rescue Unit, GRATEFUL DEAD'S Bob Weir, Michelle Shock, KANSAS and many others. Probably her favorite gigs were in JAPAN. Twice, through two different Cherry Blossoms Festivals, she got down with the Japanese. Spending time in the UK touring includes gigs at BURNLEY INTERNATIONAL BLUES FESTIVAL, LEMON TREE IN ABERDEEN SCOTLAND, 12 BAR CLUB IN LONDON, MUSICIAN IN LEICESTER, ENGLAND, and STUDIO IN HARTLEPOOL, just to name a few. Some of Sue's accomplishments include a nomination by THE COCA COLA MUSIC AWARDS for BEST NEW ROCK BAND in Georgia. That same year the INDIGO GIRLS won Best Acoustic Act and Trisha Yearwood won Best New Country Act. Her voice can be heard on many commercials, including WAFFLE HOUSE, THE NATIONAL MILK ASSOCIATION, & SIX FLAGS OVER GEORGIA. Described as a SIREN WITH A SOULFUL SOUND, she has also been featured on WOMEN OF MP3.COM - with three of her songs holding the #1, #2, and #3 in the Georgia AAA/Alternative category for close to a year. 'Sympatico', her collaboration with Patrick O'Hearn, was downloaded over 30,000 times on MP3.COM. Sue's ORCHESTRAL COMPOSITIONS won an INTERNATIONAL TELLY AWARD for an original instrumental score Sue co-composed with former STEVE MORRIS bassist JERRY PEEK. SUE G. WILKINSON? performer extra ordinaire - once you hear her, you'll remember this sound, this voice, this style of music. REVIEWS: London's Time Out: 'Hugely enjoyable pounding, stomping, riffing, rough-hewn, piano-driven R&B from the soulful Wilkinson, ripping it up all the way from Atlanta, Georgia.' Davy MacFarlane UK's Blues Maters: 'Ana Popovic... could be fighting for space in a crowded field, given the amount of blues women around: Bonnie Raitt, Susan Tedeschi, and the excellent Sue G. Wilkinson.' Atlanta's Creative Loafing: 'Sue Wilkinson has a gorgeous voice, no doubt, like some shimmering symphony of nature.' Muzikman's Sound Script: 'Wilkinson still reigns queen on this brilliant project... she adapts the lush linger of Tori Amos and Kate Bush, only to rise to a level above these youngsters. The title track [Sympatico] is at once piercing yet mellow, languid yet pulse pounding, and undoubtedly one of the most gorgeous cerebral pieces I've ever heard.' 99X Sound Menu-Creative Loafing: '...Wilkinson pounds the piano like Professor Longhair, sounds like a less frantic Janis Joplin and clearly has an affinity for classic, hard-edged R&B [more Stax/Volt than Motown].' -Justin Robertson, 6/19/00. Ginger Massey, CitySearch.com: 'Through bursts of 'rockin' R&B' from her acoustic piano and soul-stimulating vocals, Wilkinson not only dissects every dirty emotion, but she wallows around in them until the fear of that emotion is erased. Of course, just when tears begin to well up in the corners of your eyes, Wilkinson throws out a song so fun and playful that you're compelled to leave the seat and groove to the beat.' Gregory Nicoll, Southeastern Performer: '... a breathtaking synth track where Sue Wilkinson's fine voice keeps sounding like it's gonna burst into the title theme from some '60's James Bond movie. [describing Sympatico]' 99X Sound Menu-Creative Loafing: 'Filled with an abundance of soul, local band leader Sue Wilkinson can get you stomping your feet while you wallow in self-pity. The title track to her album 'See About Me' captures Wilkinson in her element; evoking Janis Joplin, creating her rare multi-cultural, cross-generational stew.' -Mossman, 8/8/01.

Here's what you say about
Sue G. Wilkinson - Little Crimes.