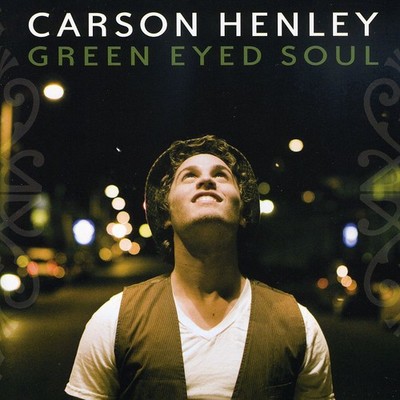 Industry Reviews: 'Top 25 Rock CDs of 2008 & our highest recommendation - EDITORS'S PICK!' Indie-Music.com 'Very cool, really nice interplay between vocal phrasing and the groove of the songs. Very infectious. Layering of vocals and harmonies on Never Comin' Home was a big hook for me. Sounds like the real deal, I could hear this on the radio and in film and TV!" TAXI.com - The World's Largest Independent A&R Company News: 4/14/09: Pandora.com adds the CD, Green Eyed Soul, to their rotation. 1/2/09: Indie-Music.com announces Greed Eyed Soul in their Top 25 Rock CDs of 2008. 11/21/08 Carson signs with Play Network! (They represent Starbucks, GAP, Hollister stores and many others). Fun Music! Think if the piano man Billy Joel were 23 years young and hung out with Maroon 5, Gavin DeGraw, Marc Broussard and James Morrison. Carson's expressive voice belts out soulful, catchy, piano-driven rock. Rarely are people brought up in a world completely surrounded by music. Carson Henley however, has been immersed in music since birth. In fact, one week prior to delivering Carson, his mom was still performing onstage, giving Carson the unique experience of live rhythms from day one. He grew up listening to the Soul and R&B greats like Stevie Wonder, Marvin Gaye, and Donny Hathaway (from his mother) and the Classic Rock and Funk Albums of The Beatles, Tower of Power and Credence Clearwater Revival (from his father). The 22 year-old singer-songwriter-piano player has also been trained on piano at the Pacific Northwest School of Music since the age of 3. It wasn't until his junior year in high school, at a school talent show, that Carson first sang in front of anyone. In college he began writing his own songs and with the encouragement from family and friends he recorded his first album. The songs he wrote are on his debut CD entitled Green Eyed Soul, released June, 2008. Carson is an entertaining live performer who blends the old school piano of Billy Joel and Stevie Wonder with a mix of rock, soul, and blues from today's Maroon 5, Gavin DeGraw, and Marc Broussard. Carson just graduated from the University of Washington with a Business/Marketing degree.

Here's what you say about
Carson Henley - Green Eyed Soul.