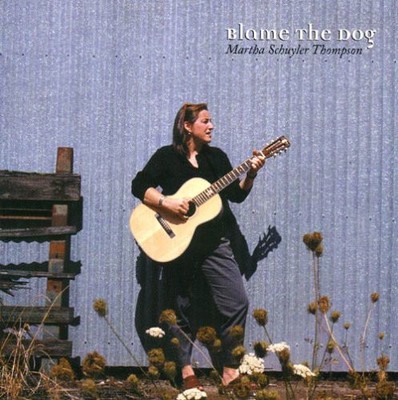 Cottage Industry Music is proud to announce the highly anticipated release of Martha Schuyler Thompson's CD entitled, Blame The Dog (the sixth on her own, Cottage Industry Music label). In this collection of twelve songs, Thompson holds a magnifying glass up to the American middle class (where art and commerce converge in an inherent dichotomy) only to find it profoundly displaced by technological advancements in a consumer-based world where the value of capitalism has clearly eclipsed that of spirituality. This radical shift from the importance of spiritual fulfillment to that of material acquisition is the underlying concern of Blame The Dog. Says Thompson, 'Since the dual search for spiritual and economic freedom is what propelled our forefathers to this new world -- it was apparent that the juxtaposition of art and commerce in America revealed both, our best and worst conflicting qualities as a people. The artistic or spiritual elements of introspection, exploration, innovation and invention that once characterized the American experience have given way to commerce and the primary by-products of capitalism in our culture; distraction, escapism and avoidance. I wanted to see if I could develop characters who were at once sorely lacking and exquisitely human to mirror this condition.' The characters from Blame The Dog live in an age when the development of sophisticated communicative devices and high-tech gadgetry should be putting them more in touch with those around them. However, the devices and inventions (now common to most middle-class households) that were initially developed as tools to connect individuals with each other serve only to alienate the characters further from the intimacy that their families, friendships and meaningful human interactions have to offer. In facing adversity, the characters find that as a buffer from the harshness of the world they seem to have a great deal of stuff to draw upon rather than spirituality. When the resulting loneliness is too much to bear, inevitably the characters seek out various forms of escape to keep their fears at bay. These songs capture the moment at which the characters experience a momentary glimmer of truth about their respective conditions in order to face themselves and their realities (however briefly) amid the turmoil of their avoidance. Says Thompson, 'It seems that moral, cultural and spiritual bankruptcy manifests itself most audibly or visibly within the American middle class these days. Poets, playwrights, filmmakers, visual artists and novelists are addressing this momentous shift among that segment of the population. When I began writing work for Blame The Dog, it felt appropriate for me to give voice to these concerns as a contemporary American singer/songwriter in order to round out the cultural arts scene by offering up a form of social commentary to represent this artistic medium. Besides, I had always been fully committed to blurring the distinction between high art and popular culture -- so this topic was right up my alley.' Blame The Dog demonstrates that once again Thompson has written, arranged, produced and recorded a powerful new album that speaks to the American experience. Blame The Dog features the following stellar supporting musicians: Curtis Salgado (Roomful of Blues, Santana, Robert Cray, Bonnie Raitt & the real-life inspiration for John Belushi's 'The Blues Brothers' character) on harmonica; George Mitchell (Diana Ross Band, Sheila E. & Leroy Vinnegar) on keyboards and organs; Warren Rand (Robert Cray, Albert King & Jimmy Witherspoon) on saxophones; Gordon Rencher (Randy Newman, Dave Brubeck & Mark O'Connor) on drums and percussion; Brian Casey (Mel Brown, Conjunto Allegre & Pink Martini) on bass; and Martha Schuyler Thompson on lead & backing vocals, acoustic & electric guitar, dobro, resonator banjo and triolian. CRITICAL ACCLAIM: 'Schuyler Thompson is a big favorite of ours. Her latest release...proves that her last album was no fluke. Martha's picked up a few more instruments and seems to have mastered anything with strings that she's ever touched. If that weren't enough, her songwriting is impeccable and her versatile voice more than does justice to the songs...do yourself a favor and listen to the entire album.' -fmqb, Progressive Adult Radio Music 'If you like women with boisterous, throaty, growling voices, this is the album for you...Although she occasionally dips down into the subtle, more restrained realms of acoustic music...Thompson spends the better part of her time showing off the ballsy woman within. Perhaps the best aspect of this album, though, is the balanced and interesting production, for which Thompson, herself, can take full credit...In a genre too often plagued with limp, lifeless voices, one thing Martha Schuyler Thompson will never be accused of is making wimpy music.' -FAME Magazine 'Oregon singer-songwriter Martha Schuyler Thompson has practically invented her own genre: call it the domestic blues. Few can wring out the sort of passion and protest from the mundane realities of everyday life that Thompson finds in songs...It helps that she has on hand a group of rootsy musicians that color her folk funky, and Thompson herself is a multi-instrumental threat on guitars, dobro and banjo. Mostly, it helps that she brings a light lyrical touch and a gifted wit to numbers...' -The Berkshire Eagle 'Songwriter Martha Schuyler Thompson comes out growling on her latest effort...She's further refined her big, aggressive sound, playing more Dobro, resonator, and electric guitar than in the past...One thing that hasn't changed is her songwriting. It's still as intelligent and thoughtful as ever, as she offers up pointed observations of the world around her. Thompson's music is a sure antidote for those suffering from the bland-singer/songwriter blues.' -Dirty Linen.

Here's what you say about
Martha Schuyler Thompson - Blame the Dog.