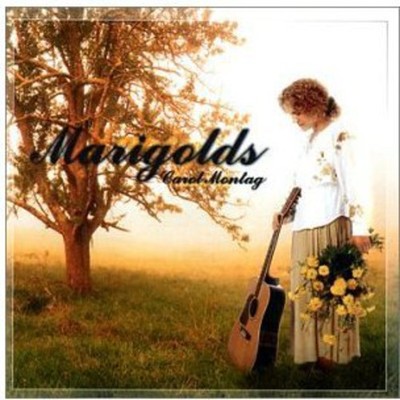 In a landscape flooded with folksinger/songwriter types trying to make a name for themselves, Carol Montag stands out as one not so easily categorized. Though she first put down roots in the folk genre, learning from masters like Joni Mitchell, Judy Collins, Joan Baez, and Shawn Colvin, on her latest release, 'Marigolds', Montag truly rises above the folk fray. The subject matter on Marigolds, her fifth recording, is a mixed package, being both personal and spiritual. 'I had been through a difficult time in my life, having lost both parents within a year of each other. Somehow my songwriting went to another level and changed in ways I never expected.' Montag sees Marigolds as a major shift in songwriting style, anticipating further growth and development with enthusiasm and excitement, 'I was thrilled to find myself writing outside the folk singer/ songwriter box, it's as if a whole new world just opened up for me.' Marigolds is not only a mixed package in terms of songwriting style, but also in terms of production. 'Some of the songs were produced with a full band; drums, bass, piano and additional guitars and are more rhythmic, while others are simply myself with guitar or piano.' 'Marigolds' Review As Ken Braband of RocketInk, Cedarburg, Wisconsin, noted upon hearing Marigolds, 'Carol Montag's vocals have always been strong and pure. Her newest CD, 'Marigolds,' beautifully blends the purity of voice found on her previous releases with solid, varied, yet simple instrumental accompaniment. As she breathes immense depth into lyrics that employ vivid imagery and heartfelt confessionals, she seems to be singing to and from her own soul. In some songs she mourns lost opportunities; in others she searches for meaning in everyday occurrences. This longing is shaded with optimism, taking the listener on an enjoyable thought-provoking journey.' Tom Paxton Early in her career Montag was described by folk music legend, Tom Paxton, as 'a genuine discovery and the best to come out of Iowa since Bonnie Koloc.' Paxton also had words of praise when he received Marigolds saying it is '...comparable it to Beth Nielsen Chapman's 'Sand and Water' in songwriting style, performance and production. Excellent!' Arlo Guthrie After opening a show for Arlo Guthrie, Guthrie personally asked Montag to return to open for two more shows the following night. Bart Haynes of the Des Moines Register said in his review of the Montag/Guthrie, 'It would be a sin not to mention Carol Montag, who opened the show. Montag has a voice that rivals Joan Baez and leaves one wondering: why is she still here?' Ballet Iowa Kennet Oberly, former artist director of Ballet Iowa, recognized Montag's songwriting talent and commissioned her to compose music for his 'Swallows Return in the Spring' ballet. The commissioned work, which depicted the human tragedy of the farm crisis, was well received by critics. Montag toured the Midwest with the ballet company. The ballet was also featured on Iowa Public Television. What Critics Say: What makes a Carol Montag performance memorable and unique is her ability to absolutely captivate an audience and transport them to another place and time. Critics and audience members often mention that listening to her sing a cappella is especially mesmerizing and evocative . 'As a five-day-a-week columnist for The Des Moines Register I was always on the lookout for story ideas. I first encountered Montag when thumbing through the 'Women's Music section at a local music store. Being intrigued by her cover, I couldn't resist the experiment. What a find! Upon hearing her music I was stunned and couldn't wait to write about her. Once I even rented a bus and took a bunch of Register reporters and editors on a trip across Iowa to hear Carol sing at Stone City. I'd match her voice and ability to engage an audience with any female vocalist anywhere, yet she's pretty much a one woman operation whose talent is in creating music. Carol has a true gift and is a true Iowa treasure. Powerful, beautiful, harmonic, soulful, real.' - Julie Gammack, former Des Moines Register columnist 'Carol has a touch of homespun about her, but she takes the stage like a pro' - Chuck Mitchell 'Carol has the type of voice that fills one with wonder and awe...you could hear a pin drop.' - Doug Olson, The Ogle Country Life-Rock '...a singer of new songs written by her for her. Carol is not folk or blues or modern, she cannot be categorized, she must be heard.' Burlington Area Arts, Burlington, IA 'Carol sings from the heart about places in all our hearts with a voice and overtones of serious musical accomplishments. She charmed us, humbled us and we all made a friend.' - The Earfood Entertainer, LaCrosse, WI What Carol Says: 'When I'm on stage I try to put myself in the place of the audience and imagine what I would like to hear if I were out there. My voice is the tool I use to help people feel the way I am feeling, to convey an emotion, a thought or experience. ' Montag is noted for appealing to audiences of all ages with a relaxed stage presence that puts everyone at ease. 'For me performing is a privilege and a time when I can connect with people on a personal level.' Discography Montag has recorded six albums: 'Song for Carrie', 'White', 'Swallows Return in the Spring', 'Marigolds', and 'Silent Night' and 'Simple Gifts' with the trio known as Tribute, which has become the number one regional best seller of Christmas music at Barnes and Noble booksellers. Carol is a native of Ames, Iowa and graduate of Iowa State University.

Here's what you say about
Carol Montag - Marigolds.