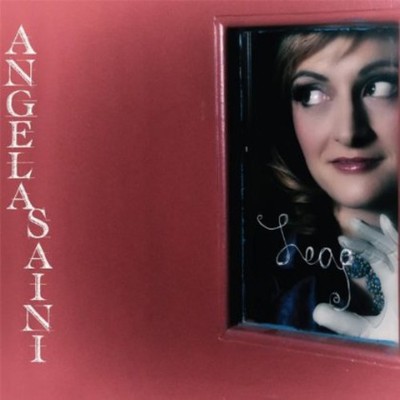 "Whatever Angela Saini is doing, she's doing it right. Her attitude, style, body language and voice are so classy and feminine, yet so rock star at the same time." (Lithium Magazine-Vanessa Markov) Fresh off a Dutch tour overseas and three cross-Canada treks in the last year, Angela Saini is set to release her second EP "Leap." Showcasing well-crafted songs about self-renewal, empowerment, love and life, Angela delves into humanistic and honest themes laden with catchy hooks and memorable melodies. Her first effort "Cake and Callouses" last year garnered a Toronto Independent Music Award Nomination as well as a "Best Female Artist" nomination in the International Acoustic Music Awards. Whip up Feist, sprinkle in some Sheryl Crow, and top with a sour cherry candy; the result is "angelic vocals with just a little stomp." (Cadence Canada Magazine) 'Leap' is aptly named as she committed to the recording process without knowing how she was going to finance it. Produced by Thomas McKay (Joydrop, Nightcrawlers) a successful fan-funding campaign earlier this year proved her message that anything is possible when you have passion and a little courage. Empowering others with songs about personal growth such as leading track "U Turn," fans gravitate to her stark honesty and authentic delivery onstage. Angela broke into the local music scene in her hometown of Calgary, AB before she had finished her first year of high school. Teaching herself to play guitar at 14, her Austrian mother and Indian father drove her to gigs as she strummed folk-pop at local clubs. She credits her first band, Supernal, for years of touring Canada and releasing four independent rock albums; experiences that augmented her natural vocal ability and refined her songwriting skills. Relocating to Toronto, her most recent band Drive Faster was featured on the AUX TV show "Master Tracks" filmed in Metal Works studios with producers Moe Berg and Laurence Currie. Berg described the process as a "homerun" and said Angela "is just so outstanding. You almost get a rush when you are recording someone like that."? Frequently gigging as an acoustic solo artist, Angela decided to take her songs electric and got the attention of Johnny Fay, drummer for The Tragically Hip. Demo sessions became pre-production for her debut "Cake and Callouses" and a year later, Angela is taking her next Leap. Her strong and soulful voice is carrying her wherever she decides to go next.

Here's what you say about
Angela Saini - Leap.