Damian Giglio - Have You Heard? 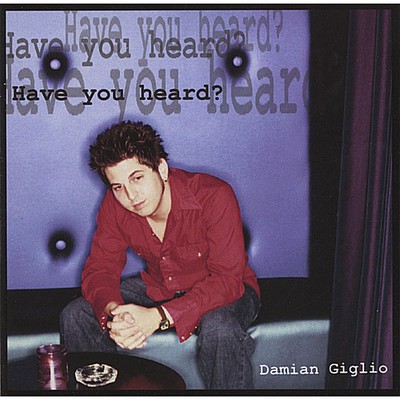 With the recent licensing of my music for Mtv's 'The Hills' I finally reached that childhood dream of hearing my music on MTV! I began getting really serious about writing and singing after an ankle injury kept me from pursuing my soccer ambitions. I had never performed or sang before putting a band together for the high school talent show. Once in college, I had grown really unhappy in Beaumont, TX and I knew that if I was going to grow as a musician, I needed to branch out and get to a major metropolitan area. I played in countless bands before moving to Denton, Texas to attend the University of North Texas in the mid to late nineties. I auditioned for a band called Farmer Brown. I tried out on Monday and by Saturday we were on stage at Ricks Place on Fry Street. We went from a 1st slot band to a headline act in about 3 months and went into the studio 3 weeks after I joined the band. We were very successful around the Dallas area and were selected by VH1 to be the only local unsigned band to play at the Blockbuster Rockfest. We were introduced by the Vice President of VH1 and even got to be on Entertainment Tonight. It was such a memorable day; an estimated 400,000 fans attended the all day show. The line-up consisted of bands like No Doubt, Matchbox 20, Counting Crows, Bush, Jewel and so on. The next band I was a part of was called Plasma Jack. I started the band with another really talented musician named Taylor Tatsch in 2000. We had a connection right away and began to write song after song. During the next two years we played shows all over Texas and Oklahoma. We shared the stage with great artists such as Blue October, Ryan Cabrera, Bowling for Soup, Flickerstick, Graham Colton, Deep Blue Something, The Nixons and so on. The band was having a really hard time finding a drummer and also struggling with it's sound musically, so we decided that it was better if we call it quits. Shortly after Plasma Jack split up, I ended up suffering an injury to my back and needed a lot of physical therapy. I moved back to Beaumont, a place I hadn't lived in almost 8 years. Now that I was back in the bedroom I grew up in, I began what would be the most creative period in my life. My old bedroom was where I had spent so much time writing while growing up. It felt so familiar that it served as the breeding ground for so many songs. I wrote 37 completed songs and countless random verses and choruses during the next 2 years. During this time all my friends began finding their way into the music industy. My friend Taylor was on tour as the guitarist for Ryan Cabrera. Edgewater had gotten signed; Graham Colton had gotten signed; Blue October had gotten re-signed; My friend Heath was now the guitarist for Bo Bice from American Idol, and on and on. One day I got a call from Taylor, and he said, I'm off the road, let's start recording your album! By this time I had lost my funding for the record because my investor got transfered by his employer. Then, out of nowhere, Hurricane Rita came and destroyed the house I was living in. It's a long story... but I evacuated to a cheap, cramped hotel room in Dallas for 3 months. I was able to keep my job if I stayed in Dallas to work for another branch while ours was being repaired. So I figured, I'm in Dallas; let's start recording and fund it myself. We get 2 days into the project, and my work in Beaumont calls me back. Back at square one. When I got back in Beaumont I was living in my parents garage room at their 'rental house' while my home was being repaired. I have been working a full 40 hour work week and driving 5 hours from Beaumont to Dallas on weekends to record. We would spend 10 hour days in the studio all weekend before driving back for work on Monday. Life took me on a wild ride to get these songs recorded. Truly I feel I can handle almost anything at this point! I believe in this project so much, and I hope that everyone will see the effort behind the CD. I hope everyone will find a connection with these songs and come out to support me. Thanks Damian.

Here's what you say about
Damian Giglio - Have You Heard?.