At the Spine - First Day of Spring 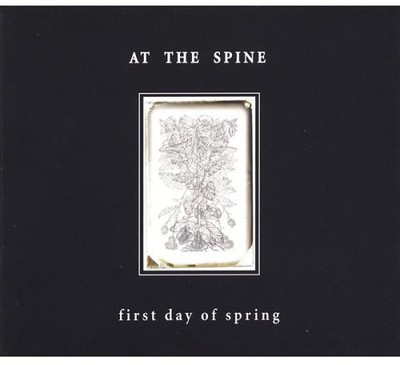 Words from press folks: STANDING UP STRAIGHT: They've been called it all: the next Pixies, just like early Fugazi, early Guided by Voices, early Neil Young. The comparisons are plentiful - and all overboard, if you ask me. Because after checking out their sophomore album, First Day of Spring, I can say that these guys stand on their own feet. Comparisons aren't really necessary. No matter how they sound, the members of At the Spine approach their entire career as a band differently than anyone else. First Day of Spring is a worldly album that touches on more than just rock 'n' roll - songs explore the damage of the war in Iraq, anti-Bush sentiments and life in a Mexican jail. Songs become stories, not just obtuse, self-reflective ballads. At the Spine gives you a glimpse of real life, not just rock 'n' roll life. They speak from the cardboard hut of a homeless man, from the desk of an inner-city teacher and from the perspective of a broken-hearted, love-deprived rocker... Music is a revolution for At the Spine, an upheaval against all the power and energy that goes into sadness, war, strife and struggle. Their latest album is 'about resisting the senselessness of the military-industrial complex ... [without letting] them take away our laughter, dance, music and right to revolt.' For At the Spine, rock is hardly skin-deep. (Leah Sottile, PNW Inlander Weekly, Spokane, WA. March 10, 2005). AT THE SPINE PACKS POLITICS INTO THE B-SIDE: The music's as much about rocking as anything, and the group's Built to Spill and Fugazi-esque guitar-driven sound proves it. And concertgoers are bound to verify that At the Spine likes to cut loose and rock the house. 'Things are messed up and we have to think about them and try and correct them, but we can't let that destroy our ability to have fun,' he said. 'We have to try to do both. That's what I'm trying to do with the album. It's kind of a sonic celebration of resistance.' (Tom Bowers, The Spokesman-Review, Spokane, WA. March 11, 2005). NOTABLE SHOWS: It takes stones to compose a song based on found refrigerator magnet poetry; it takes talent to make it unpretentious and listenable, and At the Spine's rootsy multi-instrumentalist wizard Mike Toschi exhibits both on 'Kiss and Remember,' the intro to his fine new record First Day of Spring (Global Seepej), released tonight. Sunset Tavern, 9 p.m. $6. (Andrew Bonazelli, Seattle Weekly Seattle, WA. March 16-22, 2005). SATURDAY MARCH 19 at THE SUNSET At the Spine are one of Seattle's best kept secrets. Their debut album,The Curriculum's Never Neutral, mixed Fugazi-like guitar precision with melodic alt-rock and edgy percussion, charting decent college radio play outside Seattle and garnering glowing reviews from the NYC and LA indie rock press. Live, ATS guitarist/vocalist Mike Toschi is like a jack-rabbit on crack, pogoing spastically across the stage and into the crowd, all the while managing to propel his oftentimes bitter songs to new levels of sonic intensity. This show is a CD release celebration for the band's sophomore effort, First Day of Spring, which contains the same controlled bursts of guitar rock cacophony amidst improved songwriting and a slightly more varied approach. (Matt Ashworth, Editor, NadaMucho.com, Seattle WA, March 10, 2005). TICKET/NW SOURCE: Seattle's much-praised At the Spine -- led by Mike Toschi -- releases it's second album, 'The First Day of Spring.' The band combines the political protest of folk and the angry power of metal.' (Ticket/NW Source, Seattle Times/Seattle Post Intelligencer, March 18, 2005). CD Review: At the Spine, First Day of Spring, Global Seepej Records. A collection of Fugazi-esque rockers, this album bristles with relentless energy and literate, politically inspired lyrics that will send neo-cons scrambling for the 'disc skip' button. But for all the righteous anger, the finest moments are the softer ones; the opener is based upon lyrics crafted with refrigerator magnet poetry (don't hit me-it's better than it sounds), and there's a version of an old Irish drinking song entitled 'Moonshiner' that is nearly worth the price of admission on it's own. (Brian Graham, Tablet Magazine, May 2005).

Here's what you say about
At the Spine - First Day of Spring.