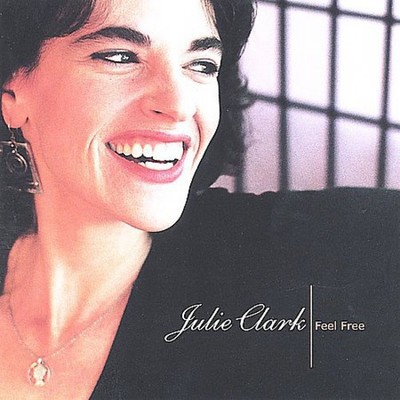 'Feel Free' is the highly acclaimed debut album of all-original material from Virginia-based singer/songwriter Julie Clark. Released on the Great Big Records label, this CD is an impressive collection of finely crafted, radio-friendly pieces. Most are acoustic folk/pop in the Lilith Fair tradition, built on Julie's clear, distinctive voice and memorable songs. Her award-winning songwriting matches the quality of her voice - clear, direct and full of emotion. Her lyrics conjur images of hope, forgiveness, and the inevitability of change, making each experience immediate and real for listeners. She writes with honesty about love and lust, heartbreak and obsession, and the struggle between temptation and commitment. Producers Rich Mossman and David Mills have succeeded in creating a record that effectively presents and supports Julie's songs. The arrangements are full, yet transparent, building in waves that are left etched in your mind. Both producers performed on the album, in addition to directing contributions from players such as John Toomey, Bill Gurley, Karl Werne, Curtis Eley, Scott Harris and Michael Sorg. Background vocals add a whole new dimension with contributions from L. E. Lambert, Resa Gibbs and John Hines. Robert Ulsh of Master Sound Studios brings more than 25 years of experience to the project as recording and mixing engineer. His skill is evident throughout, in the record's clean, fully professional sound. Rob's technical expertise, state-of-the-art equipment and attention to detail were instrumental in making this independent project a first-class production. In May of 2004, Julie won the prestigious Kerrville New Folk Competition, joining a list of winners that includes Lyle Lovett, Steve Earle, Nanci Griffith and Shawn Colvin. Also in 2004, she was awarded First Place in the Great American Song Contest, Folk/Acoustic category and has twice received honors in The John Lennon International songwriting Competition over thousands of competing entries. Check out Julie Clark for powerful, straight-from-the-heart honesty and a voice that must be heard! ------ REVIEW from Portfolio Weekly, April 29, 2003 Finding Her Voice By Jim Morrison Locally based singer/songwriter Julie Clark gives us a promising debut It's easy to fall into Julie Clark's debut disc, Feel Free (Great Big Records). Clark has an alluring voice favoring Shawn Colvin and Ani DiFranco with a dash of Natalie Merchant. Just as importantly, she has a way with melody and lyrics - an easygoing style that makes Feel Free a pleasure from the languid R-rated opener, 'Precisely (What You Need)' to the sly, upbeat closer, 'Gettin' There.' ...Clark, an ODU graduate, concentrates on writing about relationships, examining them from all sides. She comforts a lover after a tough day in 'Precisely'; remembers a friendship that ended without closure in 'One of These Days'; and examines her own failings and regrets in 'Think Too Much' and 'Just for the Record.' There are also the sexy bodice-rippers: 'The Naked Song' and 'Guilty Afternoon,' two funky pop burners that would make Shakira blush and Madonna smile. Throughout the disc, Clark's clear, warm voice takes center stage. But Mossman and Mills have added the right touches with appearances by a team of local all-stars. On 'The Naked Song,' particularly, Mills slips in appropriately funky bass lines. Throughout, Curtis Eley adds economically tasteful guitar solos. L.E. Lambert contributes a warm, stunning duet on the tender 'Whatever it Takes.' Resa Gibbs helps make 'Gettin' There' a road trip sing-along. And Bill Gurley's fiddle transforms 'Your Wings' into a ballad worthy of Nanci Griffith. In it, Clark sings about the inevitably complicated relationship between any mother and daughter. 'Your wings might have let me down,' she admits. 'These things don't mean that I can't love you and rise above, rise above.' 'I had serious doubts about including the song, 'Your Wings,' Clark says. 'It was hard to imagine people would want to hear about the struggles I've had in my relationship with my mother... But, you know, I decided to include it, and I've been pleasantly surprised by the positive feedback.' 'I'm starting to believe that if I feel strongly enough to write an honest song about something, no matter how personal, it's likely to resonate with some of the people listening,' she adds. Clark's modesty aside, this is a promising, thoroughly enjoyable debut from the first cut to the last: a birth announcement of a mature, major local talent. The CD is on Clark's own Great Big Records and is available at Birdland Records in Virginia Beach and on Amazon and CDBaby.com.

Here's what you say about
Julie Clark - Feel Free.