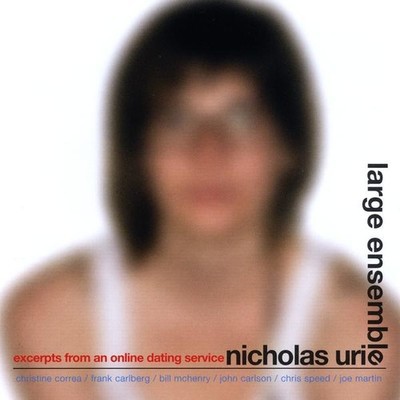 The visionary American poet and performer, Allen Ginsberg, posited that 'poetry is everywhere', not just in the sacred groves of the academy or the psychic geographies of private angst and public irony...not any more. Composer Nicholas Urie is no stranger to the new openness. He has discovered, in the internet personal ad, a new poetic medium about which he writes, 'those people who take their time writing the ad really manage to say something special about who they are and how they see life.' Urie's debut CD Excerpts From An Online Dating Service, a large ensemble recording out May 26 on the Red Piano label, surveys the current cultural landscape of internet 'casual encounters' postings. "What initially piqued my interest was the amazing level of vulnerability people are willing to show on the internet...virtually any topic is freed from taboo...without self censorship or traditional social filtering," says Urie. It is unfettered human experience put in front of an anonymous and captive audience." This attitude, when extended to Urie's music, provides an apt and accurate description of the tender, playful, lusty and altogether sympathetic settings he has created for what is, at first glance, his highly unlikely material. There is no trace of the mocking, tongue-in-cheek or flippant in this brilliantly conceived appreciation of the emotions, desires and needs that inform Urie's sources. From the opening notes and the urgent orchestral colorings of "Overture", to the wistful, yearning albeit never melancholy strains of "Afternoon", the listener understands that he/she is not being "set up" for a glib pastiche or facile satire - No Way! Instead Urie, perceptive and enlightened beyond his 23 years, and the amazing band he's assembled for his debut outing attempts to mirror, non-judgmentally, without cloying sentiment or mawkish cliché, the essence of the human faces behind these anonymous speakers words; words rife with loneliness and longing, the wonder and fun that move and, ultimately, define us all: the all too familiar faces peering out at each of us from inside the looking glass. The band is anchored by a stellar rhythm section featuring Frank Carlberg (a Red Piano artist himself, and one of Urie's mentors); the great Joe Martin on bass and the highly regarded and endlessly inventive Mike Calabrese on drums. Among the featured soloists used with pinpoint precision by Mr. Urie, are saxophonists Bill McHenry and Jeremy Udden, trumpet maestro John Carlson and guest artist, on clarinet, the scintillating Chris Speed. But it is Urie's utilization of vocalist Christine Correa that truly elevates and singularizes these interpretations, these sonic re-enactments, so to speak, of his "correspondents" honesties and openness. Plumbing the emotional crevices and interstices of these "excerpts" Urie has discovered the latent poetries of the hungering soul, and has created, without demeaning either credibility or intent, a work of intense beauty and sensitivity. Excerpts From An Online Dating Service is an oratorio of hope and human perseverance that transcends the seemingly pedestrian nature of it's sources. It is among the first important jazz orchestral works of the 21st century. A stunning debut. Born in Los Angeles, California in 1985, Nicholas Urie was a recipient of the first annual ASCAP Young Jazz Composer's Award at the age of 17. Soon after, Nicholas left Los Angeles to study composition with Bob Brookmeyer in Boston, MA. A Graduate of the New England Conservatory of Music, receiving both a bachelors and masters degrees, Nicholas was also a member of the BMI Jazz Composer's Workshop under the direction of Jim McNeely in New York City. Nicholas' music has been heard internationally at festivals and concerts in the Netherlands, Peru, Syria, Spain, England, Germany and the United States. Nicholas has an unusually varied background in all forms of composed music bridging the gap between jazz and contemporary music styles. Nicholas is an active conductor leading both large jazz ensembles as well as full symphony orchestras performing works that range from straight ahead jazz to contemporary classical music. Nicholas has frequently collaborated with celebrated vibraphonist Dave Samuels who has commissioned a number of pieces for Big Band and chamber ensembles, most recently commissioning a concerto for Vibraphone and Chamber Orchestra that was premiered by the Berklee School of Music Chamber Orchestra in December of 2007. Nicholas' music has been performed by; Bob Brookmeyer, Frank Carlberg, Chris Speed, Bill McHenry, Dave Samuels, Christine Correa, Joe Martin, Bob Moses, the Metropole Orchestra, Ximo Tebar/Granada Jazz Festival Big Band, the Ambassador Jazz Orchestra, the Möbius Chamber Orchestra, the Berklee Chamber Orchestra, Orange County High School of The Arts Symphony Orchestra, and the Jazz Composer's Orchestra among others.

Here's what you say about
Nicholas Urie - Excerpts from An Online Dating Service.