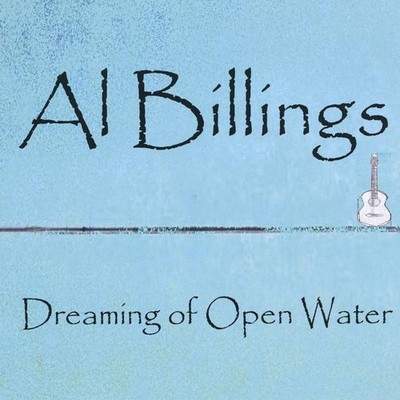 1. Waterloo Road Waterloo Road is a glorified dirt path halfway between Deming, New Mexico and the Mexican border. This composition is an elegy for My wife's late friend Tom Maine, a wry, edgy stringbean of a man racked with emphysema, and permanently arched into the force of his own stubborn urge to survive, a navy Veteran and Pacific Island entrepreneur come home to live out his final years in wind-blown meditation. 2. Dreaming Of Open Water A composition that improbably conjures for me the twin images of Elvis Presley slouching in the back seat of a two-tone Ford, and a prisoner madly dashing to freedom through the riparian tangle of a muddy river bank, all set to a bouncing, polyrhythmic, Bumps Blackwell-inspired roll. The original working title was "Elvis In Africa." 3. Pinky's Boy For a West Texas cowboy who fully understands what it takes to fill a pair of James Leddy boots. 4. From Here To Baton Rouge A Waltz that I would someday like to hear recorded as a duet for grand piano and violin. 5.The Sea Of Cortez An exploration of dissonance that earned it's title while I was eating chilli dogs at the A & W Root beer stand in Gila Bend, Arizona, hypnotized by the brine-laden breezes blowing towards me from the Gulf of California. Scraping, dredging, sea horse skeletons, salt stink, half-mad conquistadors and their hallucinatory ramblings. This piece is not for the harmonically challenged listener, who is perfectly entitled to equate listening to it with swallowing ipecac. 6. Where The Moon Fell Into The Sea The name given by indigenous natives to the stretch of ocean between Tierra Del Fuego and Antarctica, a powerfully descriptive phrase that demonstrates how inept white people are at assigning place names. Performing this piece always makes me feel as if I'm flowing over the edge of some unknown precipice. The composition both enters and exits over the Arabic maqam or mode called Kurdi, which gives the piece it's Middle Eastern Flavor. 7. Jimbo's lament The guitarist Peter Lang liked this waltz and called it a 'Circle Song' because of the way both verse and chorus revolve into and out of each other. I don't know if Jimbo can actually dance. 8. Far Rockaway I've never actually been to Far Rockaway, but it's beautiful name has always caused me to visualize mustachioed gentlemen peddling around on velocipedes, and to hear the ghostly remnants of a Sunday afternoon brass band concert drifting through the fog. I lifted the introduction's alternate bass figure from John Fahey's "Sunflower River Blues," proving to myself once again that, not withstanding my compositional efforts, I'm nothing more than one of his many bastard musical children. 9. Cupid Sam Cooke, who also composed this lovely song, was the greatest singer in popular American music history. He possessed a voice so ripe with intimacy and pure musicality that it's hard to imagine any vocalist ever surpassing him. He was a yard dog given to simultaneously fulfilling both his basest urges and his deepest spiritual longings; in other words, a human being. This song is proof positive that all great music lives in the present tense. 10. Rural Retreat Commemorating a visit to Jim Lloyd's barber shop in Rural Retreat, Virginia, where all barbering ceases when it's time for a jam session. The guitar is tuned in Double-C, a traditional Appalachian banjo tuning. 11. Victorio Dedicated to the memory of the great Apache chief Victorio, who gave the combined forces of the United States Army, the Federales and the Texas Rangers a run for their money before they finally ran him to ground in the Tres Castillas Mountains in Chihuahua, and slaughtered him. I've rewritten history here, and in my musical version of events, Victorio has escaped. The listener is urged to surrender to the dust, the hoof beats and the image of Victorio's hair streaming in the wind as he clatters into the deepest, most isolated reaches of the Despoblado and eludes his would-be captors. 12. Salinity A rubato-laden composition inspired by the serial repetitions of Phillip Glass and tinged with the mournful air of an Irish Planxty. 13.Avisador An improvisation loosely based upon the Middle Eastern improvisational form called Taqsim. For those who care about such matters, the music moves through the Middle Eastern modes Hijaz and Kurdi and touches upon a few others. For the technically curious, the guitar is tuned in modified d-modal and the piece resolves over a C# bass drone. This was a one-take recording and impossible to duplicate. 14. When The Zinnias Were In Bloom My first slide guitar composition, composed in 1973. 15. More Open Water Revisiting a composition already included on this album. A metal paper clip was woven through the strings near the guitar's bridge gives the song a calypso-flavored lilt. 16. We Are Climbing Jacob's Ladder A taste of a powerful African-American spiritual extracted from the Public Domain.

Here's what you say about
Al Billings - Dreaming of Open Water.