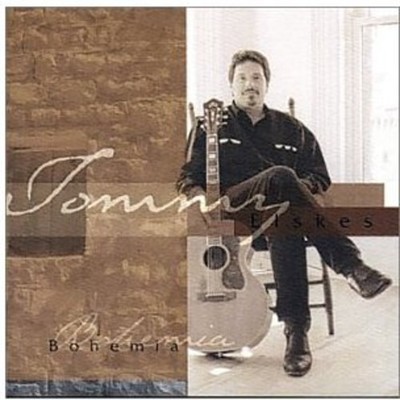 The Austin music scene has produced more than it's share of characters and world-class songwriters. People who can toss back a few long-necks, wreak a little havoc, then weave the whole episode into into a heart-rending tune. There's Townes Van Zandt, Guy Clark and Lyle Lovett, of course. Now you can add Tommy Elskes to that list. Bohemia, his first album for Horizon Records, is a tantalizing combo plate of R&B soul, blues and country which shows off Tommy's deft touch with a lyric. In addition, his powerful vocal delivery takes the listener from a whisper to a scream, and adds an essential layer of emotion to his dramatic story-songs. 'I don't see myself as a one-trick pony,' says Tommy, who traces his versatility to Austin's fertile musical soil. Austin is a great place for a musician to learn his chops. When I first got there, you'd have an R&B rhythm section and some kid who could play anything from Jimi Hendrix to Eddie Van Halen. Then you'd have two conjunto horn players that played in some Latino band--all these people from all these places, but the vibe was so good and so hot that everybody was trying to stretch out. The music was incredibly exciting.' Tommy's tale begins in Albuquerque. By the age of twelve he had already caught the music bug, singing in choirs and tuning into anything with solid vocals. When I was a kid I was nuts for the Betty Boop cartoons with their Cab Galloway music, he laughs. 'Then in school I had a little trio that did Crosby, Stills and Nash stuff, and after high school one of those guys and I went to L.A. to make fame and fortune in the record business.' In the end they wound up writing songs for The flintstones cartoons. After a year, Tommy returned to Albuquerque, got married and moved to Kansas, where he framed houses for a living and hooked up with an R&B band for fun. The band, the marriage and the location didn't take. Tommy briefly joined some old friends playing apres-ski in Vail, Colorado, but according to him, 'They were going up there to play Jim Croce and John Denver, and before it was all over I had them doing Taj Mahal and Little Feat, and screwed the whole thing up!' Undaunted, he settled in Austin in 1976 and formed a band called Kiwi. That outfit became a mainstay of the Austin scene, opening shows for the likes of Muddy Waters, Carl Perkins, Richie Havens, Lightnin' Hopkins, B.B. King and Lyle Lovett. It was there that Tommy's gregarious style earned him the nickname 'The Street Savage.' He explains, 1 had a pretty notorious reputation years ago among the songwriters of Austin,' he admits. I just happened to get in more trouble than most of them. So Lyle Lovett started calling me the Street Savage. Later he had a tour called the Lyle Lovett Friend of a Street Savage Sings and Plays for You Tour.' When Kiwi folded in 1981, Tommy sang jingles and continued pigging around Austin. Once he began playing solo in 1988, local musicians began pestering him to record an album. The result was 1993's King of Dixie, which was released on Austin tiny Amazing Records and made the year's Top Ten list for several Southwest radio stations. Following the album's release, Tommy migrated to Telluride, Colorado, where for the next five years he served as artist in residence at the famed Peaks Hotel. That artistry reaches full flower on Bohemia. For starters, there's the Cajun-flavored country rock of 'Breaux Bridge,' the true story of Tommy's run-in with 'the wildest, Bator-catching, catfish-ticking wild man you have ever seen.' Then there's the country-inflected 'Try Me,' a vivid tale of a love struck man coaxing a woman out of an abusive relationship. On the lighter side, consider the wry Too Fat to Fly,' based on Tommy's childhood attempt to jump off the roof wearing a Superman cape. And Tommy's solo talents are on display with unique covers of the Left Banke's 'Walk Away Renee' and Elton John's 'Madman Across the Water.' Tommy, who settled in the musical melting pot of New Orleans in the fall of 1999, truly comes to life on stage. There are certain artists that have a killer attitude about being on stage,' he insists. 'People like B.B. King and Tina Turner. I find myself relating to people who shouted. I can finesse things with anybody, but when I think about putting on a show I think of myself as one of the shouters, people who come on real strong and give you no mercy. 'I think that when you get up there, you oughta do it all and don't be timid. Cause that's not where it's at. Shy is not gonna get anybody's attention. 'If you're not jerking people's strings and making them feel something, then you're not getting the job done. And so far that ain't happened to me--thank God!'

Here's what you say about
Tommy Elskes - Bohemia.