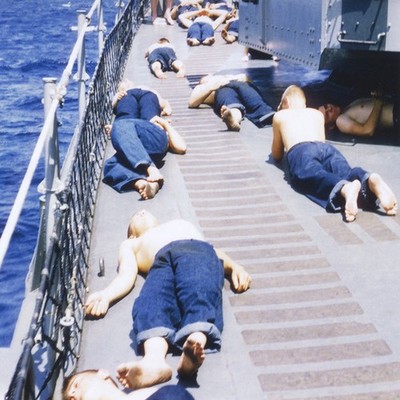 Demitasse "Blue Medicine" Demitasse (pronounced "DEHmee-toss") is a two piece acoustic group. It is the side project for Erik Sanden and Joe Reyes of the Texas art rock band Buttercup. Singing at the very limits of their range, the duo gets sherpa high with their vocals, mixing melody, spoken word, and noise. The sound is somewhere between Simon and Garfunkel, Leonard Cohen, and the Beach Boys on a dark day. Or Elliott Smith on an extremely bright, sunny day. Or John Cale tossing his car keys to Neil Young. Joe Reyes is a Grammy award winning guitarist and multi-instrumentalist. Erik Sanden composes songs that NPR calls "jangly art rock for the left side of the brain." Together in Buttercup and now in Demitasse, they sing together like brothers and are charmingly familiar with their audiences. Hoping to cure sadness with sadness, Demitasse offers catharsis with their dark-pretty songs and story-telling live shows, where audience members leave changed and smiling. Underlying humor and life-affirming lyrics make the sadness pleasing - much like Roy Orbison smiling through his blacked out glasses while singing "Crying." Note: the name "Demitasse" means that the glass is half full, even with a hole in the bottom. Both Joe and Erik lost their fathers recently, and their debut record grew out of the chaos of caring for loved ones with long-term illnesses. Erik's father was battling to Leukemia, Joe's Alzheimer's. In between trips to the hospital a cycle of songs emerged. The recording became something lovely, a place to escape and celebrate beautiful moments with family. The album is called "Blue Medicine" a nod to how the blues are often the best medicine when one is suffering emotionally. The first single "Comfy Coffins" is Carpenters-esque in it's soft-robed musicality; it is sweet and comforting. Many of the songs on "Blue Medicine" start small but swell: the coda on "The Blues or Die" may be the most compelling moment on the record. "Fambly" sings of the importance of family, especially when things get weird. At some point in the midst of the recording Erik said to Joe, "it's like we are alone, together." So Demitasse recorded the record "live" as much as possible, always performing tracks simultaneously - two at a time - so that no one would ever be alone while recording. This "Vow of Togetherness" spills into their live show. Audience members leave a Demitasse performance altered, less lonely, high on music. The Demitasse mission: to write the definitive anthem for the clinically depressed, stamping out loneliness wherever they roam. In fact, a portion of all of the proceeds generated from "Blue Medicine" go to a non-profit anti-depression charity To Write Love on Her Arms. Street date April 15th, 2014 on Bedlamb Records For more information please call Robert Vickers at Proxy Media at 212 674 3541 or [email protected]

Here's what you say about
Demitasse - Blue Medicine.