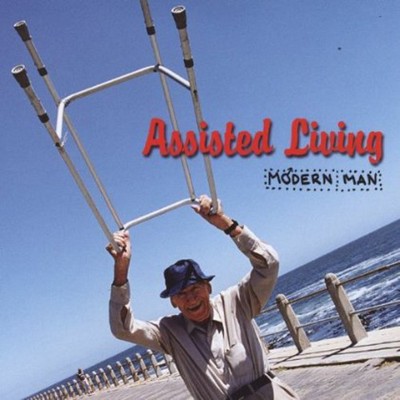 Filling the void between the Three Tenors and the Three Stooges, it's.... MODERN MAN! We've been called 'the funniest band ever', but don't just take our word for it, here's some reviews from people who ought to know... Like Lincoln Center!... Modern Man is without question the cleverest, funniest, most versatile group that I have heard in years. They were the surprise hi-lite of this year's Roots of American Music Festival at Lincoln Center in New York. -Spike Barkin, Producer, Roots of American Music Festival. Or Canada's Summerfolk Festival! I would not hesitate to recommend Modern Man as an addition to any festival lineup. If you need an act that will have your audience "in stitches", there is none better. Easy to work with, musically and lyrically intelligent, consummate performers in concert and workshops, up for any changes you throw their way. A guaranteed winner. -Richard Knechtel, Summerfolk Artistic Director Like Talk Entertainment.com! These guys, David Buskin, Rob Carlson and George Wurzbach, who write their own material and perform it to perfection, have the funniest set of funny bones in the world. From song one to finale and encore you are on a non-stop express train of uproarious entertainment. It will cleanse the soul of any pollutants and you will feel brighter and lighter and have a new purpose in life... to see Modern Man again, whenever and wherever they are playing. -Oscar E. Moore, Talk Entertainment.com Or Cabaret Scenes.com! A more rib tickling, quick witted or satirical trio would be hard to find. It's a near miracle that David Buskin, Rob Carlson and George Wurzbach sing so well, considering they do it tongue in cheek. If the group were not musically talented they could perform as stand up comedians. -Barbara Leavy- Cabaret Scenes And one of our favorite Coffee Houses! Caramba! What a show! These guys have the rare ability to combine superior musical talent with outrageous humor. We have never seen such a happy audience at the end of a performance... The most enjoyable show we have ever had. I can say-hands down- that Modern Man has been the most entertaining, funniest and most favorably commented-upon act we have ever presented. -Mac McLanahan, Rose Garden Coffee House, Mansfield, MA.

Here's what you say about
Modern Man - Assisted Living.