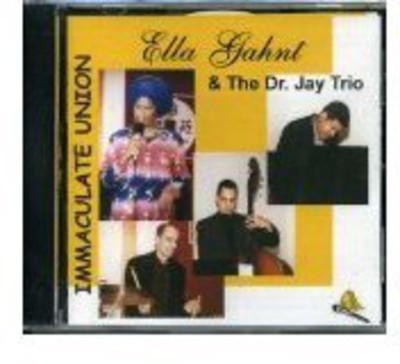 ELLA GAHNT, vocalist, arranger, has been performing professionally since the age of 18 and is finally living her dream by performing the music she loves. Born and raised in Philadelphia, PA, she has studied piano, voice, guitar, saxophone, and music theory at Granoff and Settlement Music schools, and continues private instruction with Leon Mitchell - composer, arranger, vocal coach, and musical director of The Philadelphia Legends of Jazz Orchestra. Ella has worked as vocalist and music copyist on recordings with many popular artists like Grover Washington, Jr., The Stylistics, and Pieces of a Dream. Ella was founder/leader, lead and background vocalist, and arranger for Instruments and Voices, an excellent pop/jazz group that performed in the Philadelphia area and appeared regularly on the 'City Lights' TV show. She has performed as a jazz vocalist throughout the Delaware Valley with many fine jazz groups including The Cullen Knight Trio, The Philadelphians Big Band, The Sam Reed Quartet, The Roger Prieto Sextet, Tony Williams & Friends, The Sam Dockery Trio, and The Butch Ballard Trio. Ella performed at the CoreStates 'Philly Divas of Jazz, Poetry and Comedy' concert with Evelyn 'Mama Diva' Simms, Barbara Walker, Michal Beckham, poetess Sandra Barnes, and comedienne Erma Holmes. She performed with The Gerald Smith Quartet at the '97 PECO Energy 'Jazz 'til Sunrise' Festival, and at the '97 Philly Fall Festival of Jazz. Ella has appeared as vocalist at many of the Philadelphia Area classiest venues. She has appeared with the Webb Thomas Trio at the quintessential Zanzibar Blue, as a regular at Meiji-en Restaurant, and Beaujolais Bistro. She has also appeared in full concert at Temple University, Philadelphia, PA, and Haverford College, Haverford, PA with The Dr. Jay Trio featuring Dr. Jay Fluellen on piano. Ella and The Dr. Jay Trio were also featured as part of the 1999 Bell Atlantic Jazz Festival and the 1999 and 2000 Mellon Jazz Festivals. Ella has performed as part of a duo with Bill Meek at the lovely Sofitel Hotel, at the 2000 'Scatfight' at The Clef Club in Philadelphia along with Evelyn 'Mama Diva' Simms, Denise King, and Suzanne Cloud, and with her quartet at the 2001 Philadelphia Unemployment Project Fund Raiser. Ella has recently become the vocalist with the Philadelphia Legends of Jazz Orchestra, which was featured on the 2001 Mellon Jazz Festival at the Clef Club. All of these associations give Ella the chance to blend with different sounds and tell musical stories in her own unique way while honoring the vocal styles of those great divas who trod the path before her like Sarah Vaughn, Carmen McCrae, Betty Carter, and her namesake, Ella Fitzgerald. Ella will no longer be the country's best kept secret because her lovely voice has been documented in CD format performing originals as well as some of your favorite Jazz/Traditional Pop standards. The CD is called 'Immaculate Union' which perfectly describes the union between Ella Gahnt & the Dr. Jay Trio. The CD contains 13 songs, 8 of which feature vocal selections by Ella Gahnt with The Dr. Jay Trio, and the remaining 5 feature instrumental selections written by pianist Dr. Jay Fluellen. Early reviews are very favorable. Look out for Ella Gahnt. She's traveling at the speed of swing!

Here's what you say about
Ella Gahnt - Immaculate Union.