Jess Oakenstar Hawk - Your Heart Will Show You 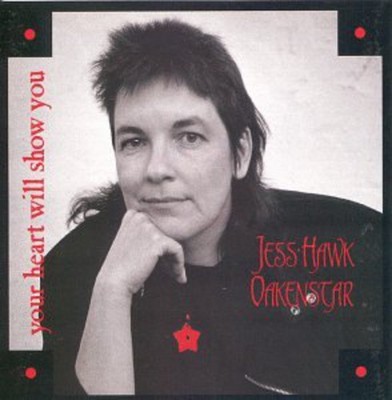 Jess Hawk Oakenstar is a widely traveled solo guitarist/singer/songwriter who was born and raised in Zimbabwe. After leaving university, she entertained in hotel and resort environments in Natal, South Africa before being hit with the travel bug and moving to Great Britain for two years. From there she traveled to New Zealand, where she lived for ten years, performing and touring nationally as a singer/songwriter in concerts and revues, while also honing her cover repertoire in saloon bands and as a solo artist. In 1990 she worked her passage to the US aboard a German container ship, and from then until late 1996 she toured constantly, both nationally (36 states across the country) and internationally (in Australia and New Zealand) as a singer/songwriter. She was a national songwriter finalist at the renowned Kerrville Folk Festival in Kerrville, Texas, and her music has been heard in the US on over 100 radio stations including the syndicated 'River City Folk' and 'The Songbag'. She has also received much critical acclaim for her two albums, 'Leave a Little Light Behind' and 'Your Heart Will Show You', both of which were produced by Jeff Dayton, band leader for Glen Campbell. She was also featured on 'A Love Worth Fighting For', a compilation album which included such artists as Janis Ian and Ani DiFranco. Jess currently resides in Phoenix, AZ, and works regularly as a solo performer, as well as being part of a duo, Wayward Maggie. Editorial Reviews Weekly Planet, Oct '95 Oakenstar is a politically conscious songwriter blessed with an appealing, unaffected voice and a fistful of solid songs. ...Eminently sensible and never whiney or preachy. Canadian River Music, Aug '94 (A)n exciting 2nd album, rock and country with hints of jazz and other influences, an adult acoustic contemporary sound, with an excellent band...danceable and upbeat, with plenty to say as well, couched in thoughtful, intelligent lyrics. (Of the title cut): a superb song and a big favorite here! Rochelle Lynn Holt newsletter, Pine, NC, Aug '94 Each composition is totally distinct and unique...Rhythms linger like folksy inspirational spirituals, compelling, enthralling and certainly universal. What a soulful talent and voice. Eddie Russell, Country Eastern West, Oct '94 For me it's not just the daring well-crafted songs, but it's also a strong believable voice and a distinctive production. Jess is the total package to my ears and heart. Laura Post, SingOut Vol 39 #4 '95 Oakenstar...brings a global sensibility to her social consciousness, and complex accents to her vibrant, rich singing voice. ...(A) distinctly non-American grace permeates the recording...(D)ecisive lyrics, subtle hooks and an irresistible, clear vision. Graham Reid, New Zealand Herald, Jan '95 (V)ery appealing 10-track outing of tight folk-rocking tunes which carry her pinpoint lyrics.

Here's what you say about
Jess Oakenstar Hawk - Your Heart Will Show You.